IRL has announced the launch of a new edition of its single country report A Profile of the Chinese Paint Industry. In this study, IRL examines China’s paints and coatings market independently and not as part of a regional study on the Asia Pacific paint market, thereby enabling us to present more in-depth information on paint market influences and trends. This fully updated seventh edition provides market data for 2013 and forecasts for 2018.

The total consumption of paints and coatings in China reached 13.1 million tons in 2013, and is forecast to rise to nearly 17.9 million tons by 2018. This is equivalent to an average annual growth rate of 6.5%, which is somewhat lower than historical trends in China but is still impressive compared with the more mature markets such as the EU, US and Japan. This growth forecast takes into account predicted Chinese GDP growth, the development of the iron and steel industry and its related sectors, growth in downstream industries (such as construction, automotive, petrochemical and machinery) and current per capita coatings consumption, which remains low. 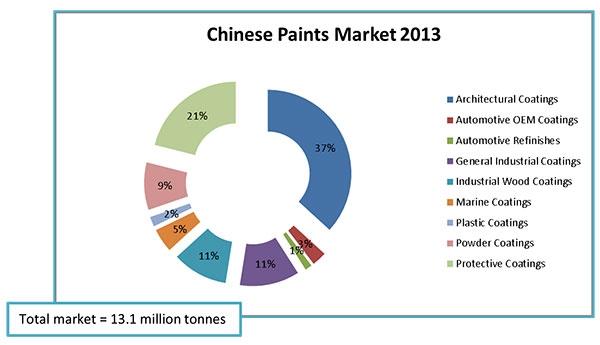 Chinese Paint Market
After four years of rapid growth, the Chinese paints market started to slow down in 2013 due to the unfavorable global economic situation and deceleration of certain downstream industries. However, demand for coatings in the construction, automotive, appliances and infrastructure sectors continued to grow. Therefore, the total paints market grew fairly moderately in 2013.

Architecture is the largest end-use sector in China and continued to grow quickly in 2013 due to an increase in the construction of low-cost housing, commercial housing and infrastructure. The protective coatings market is the second-largest sector in China due to the rapid development of construction, transportation, petrochemical, energy and machinery projects.  Nuclear power and wind power infrastructure, high-speed rail, roads, bridges, containers and off-shore engineering applications continued to drive growth in the protective coatings market in 2013.

The marine coatings segment was the worst performing in 2013, mainly due to deterioration of the global marine industry and competition from other Asian countries for shipbuilding and repair.

Other segments such as coil coatings, road marking coatings, can coatings and aerospace coatings, achieved reasonable growth in 2013.

Nevertheless, the Chinese market is expected to grow more rationally after a decade of fast growth. The industry will continue to consolidate, and the market will become more integrated between manufacturers, distributors and service providers. The overall industry is facing further challenges, in terms of capital, strategic transformation, increasing demand for quality products and services, growth of environmental and safety issues, and a dynamic business environment.

A Profile of the Chinese Paint Industry gives an insight into the market changes in the past few years, as well as outlining the key trends affecting nine mainstream paints and coatings segments: architectural/decorative, industrial wood coatings, protective coatings, marine coatings, automotive OEM coatings, automotive refinishes, powder coatings, general industrial coatings (including coil coatings) and plastic coatings. Forecasts on these are presented for the year 2018 alongside market data for 2013. The cost of the full report is €3,250.