Following a strong second quarter, specialty chemicals company LANXESS raised its guidance for the full year 2015. The company now expects to achieve EBITDA pre exceptionals within a corridor of EUR 840 million and EUR 880 million. It had previously assumed that EBITDA pre exceptionals for the full year would come in at between EUR 820 million and EUR 860 million.

“LANXESS is returning more and more to the right course. In the second quarter of this year, we posted a very good operating result to which all segments of our company contributed,” said Matthias Zachert, Chairman of the Board of Management of LANXESS. “On the basis of these strong figures and the rapid implementation of our realignment program, we assume that our annual result will be higher than previously anticipated.”

Sales improved by 4.3 percent in the second quarter of 2015 to EUR 2.1 billion, compared with EUR 2.0 billion in the prior-year quarter. Higher volumes and positive currency effects more than offset the raw material induced lower selling prices. EBITDA pre exceptionals increased by 13 percent from EUR 239 million to EUR 270 million. This development was driven by increased volumes, savings generated by the realignment, and positive currency effects due to the strong U.S. dollar. The EBITDA margin pre exceptionals rose accordingly to 12.8 percent, against 11.8 percent in the prior-year quarter.

Net income improved by a substantial 58.2 percent to EUR 87 million from EUR 55 million a year earlier. Operational development and proceeds from the sale of noncurrent assets contributed to this increase.

Capital Expenditures Significantly Reduced
At around EUR 1.4 billion, net financial liabilities were almost at the same level as at the end of 2014. Following the completion of major projects in Asia, capital expenditures declined by more than half in the second quarter against the prior-year quarter from EUR 154 million to EUR 73 million. “The financial consolidation measures we have implemented as part of our realignment process are taking effect,” said LANXESS CFO Michael Pontzen. “This development was recently rewarded by the rating agencies Moody's and Standard & Poor's when both confirmed our investment-grade rating with stable outlook.”

Business Development by Segment
Higher volumes, positive currency effects and raw material induced lower prices characterized business development in the Performance Polymers segment and resulted overall in sales of around EUR 1.1 billion. This represents an increase of 3.5 percent against the prior-year figure of around EUR 1 billion. EBITDA pre exceptionals for this segment climbed by 22.1 percent to EUR 149 million, compared with EUR 122 million in the second quarter of 2014.

In light of continued good demand in almost all customer markets, sales of the Advanced Intermediates segment advanced by 3.1 percent from EUR 454 million to EUR 468 million. EBITDA pre exceptionals for this segment came to EUR 80 million, 2.6 percent higher than the prior-year level of EUR 78 million.

The Performance Chemicals segment also saw very good performance for the quarter, with sales rising by 6.8 percent to EUR 553 million after EUR 518 million a year earlier. EBITDA pre exceptionals advanced by a substantial 35.8 percent from the prior-year level of EUR 81 million, to EUR 110 million. Low raw material prices during the reporting period, positive currency effects and savings especially contributed to this improvement in earnings.

Realignment Remains Fully on Schedule
The three-phase realignment program initiated by LANXESS last year continues to progress on schedule. The company has already successfully implemented the first phase. Measures of the second phase, aimed at improving operational competitiveness, have also been initiated. They include the reorganization of the production networks for its rubber types EPDM (ethylene propylene diene monomer) and Nd-PBR (neodymium-based performance butadiene rubber).

The third phase of the program is focused on improving the competitiveness of the business portfolio, especially through potential alliances in the rubber business. “In this connection, we are currently engaged in very constructive discussions and assume that we will achieve concrete results in the course of the second half of the year,” said Zachert.

LANXESS has initiated a carve-out process to transfer its rubber business to a legally independent business entity within the LANXESS Group. “In this way, we are creating the conditions that will enable us to bring the rubber business into an alliance,” continued Zachert. The new entity is supposed to comprise the Tire & Specialty Rubbers (TSR) and High Performance Elastomers (HPE) business units, with their 20 production facilities and some 3,700 employees as well as supporting administrative functions.
Related Searches
Suggested For You 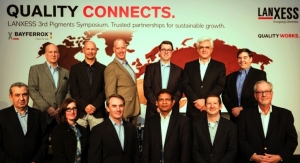