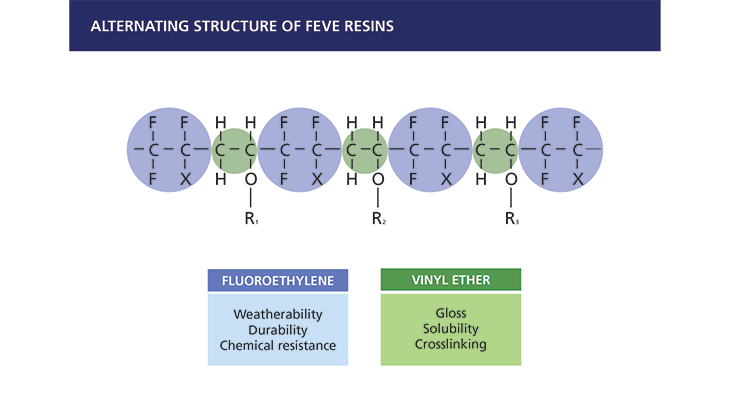 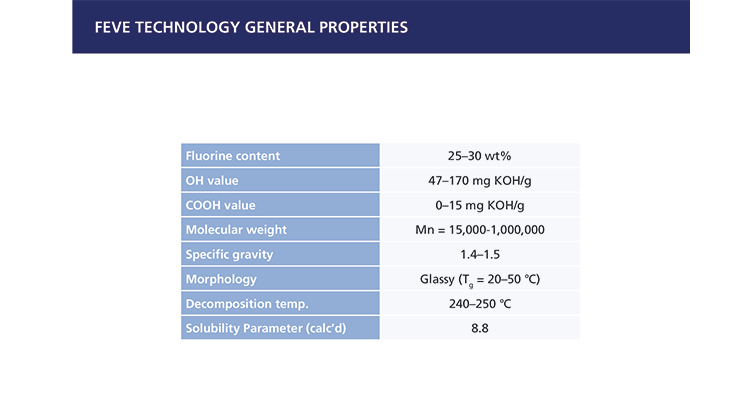 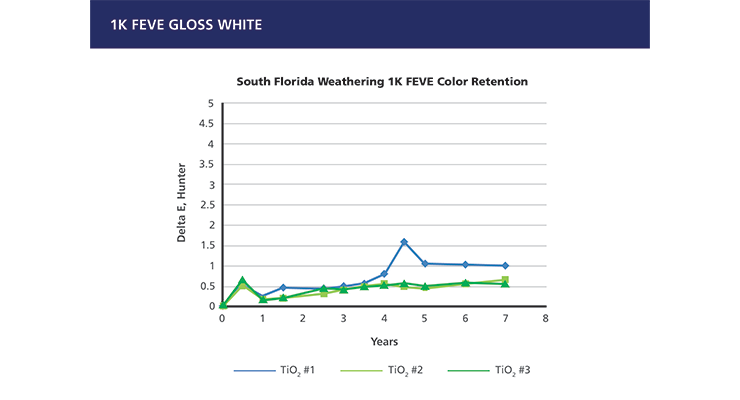 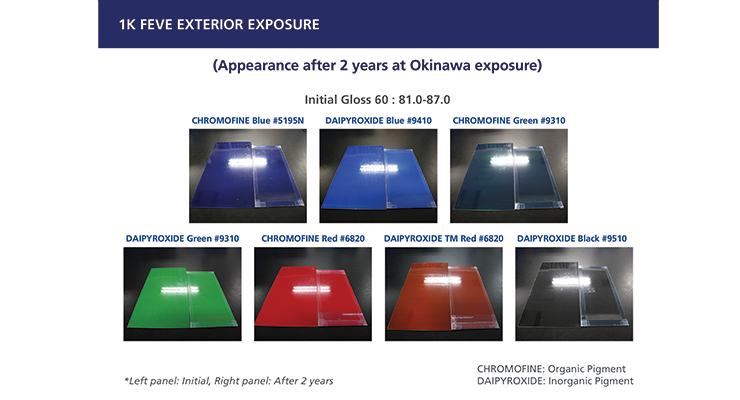 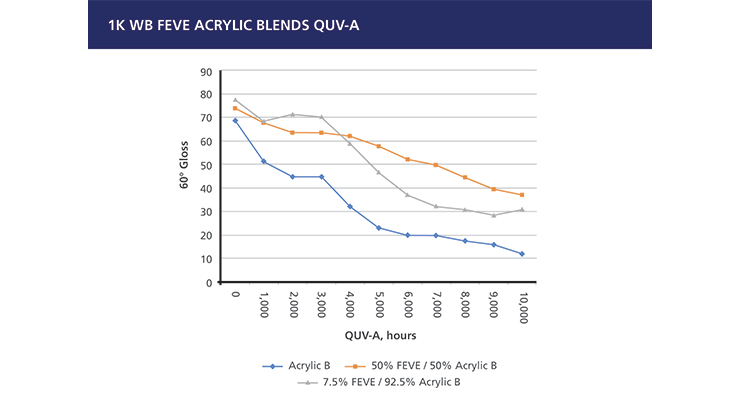 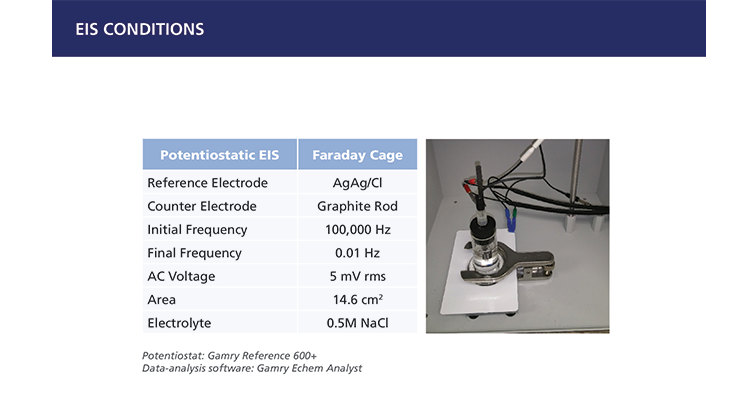 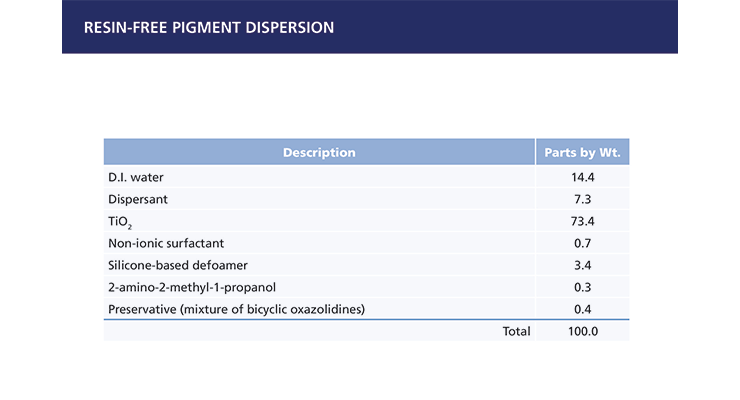 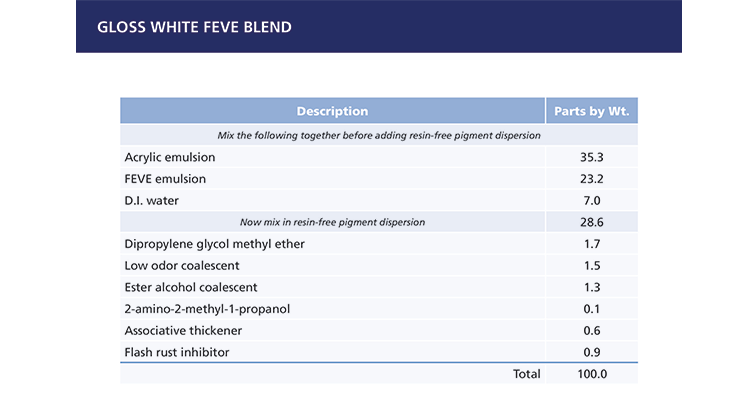 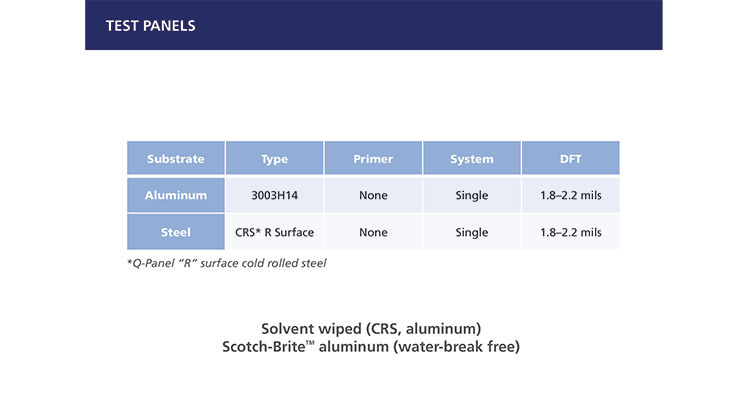 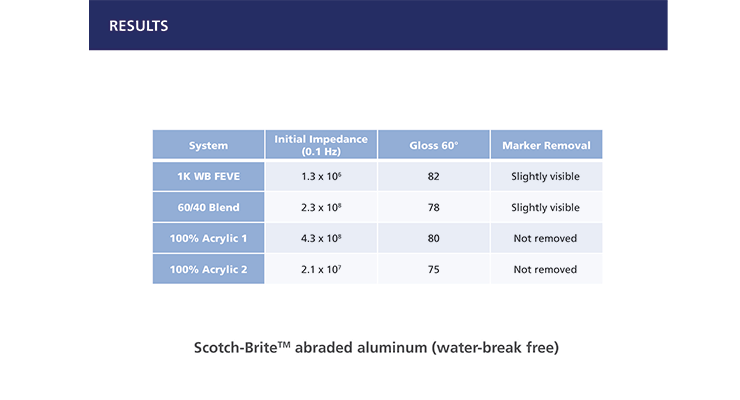 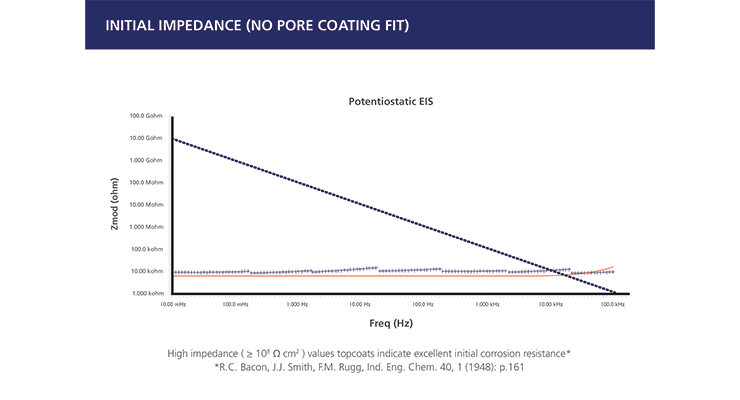 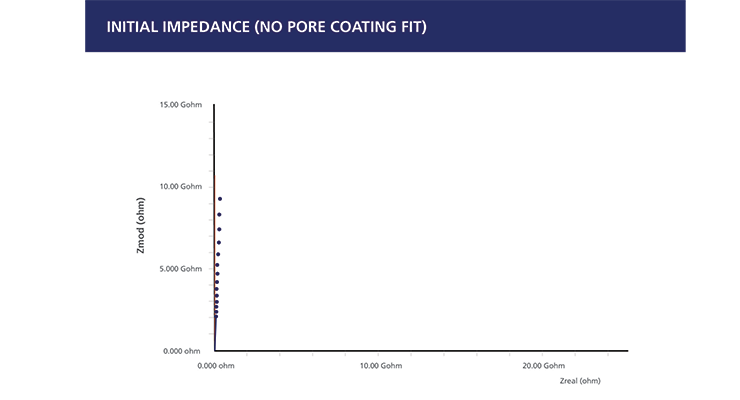 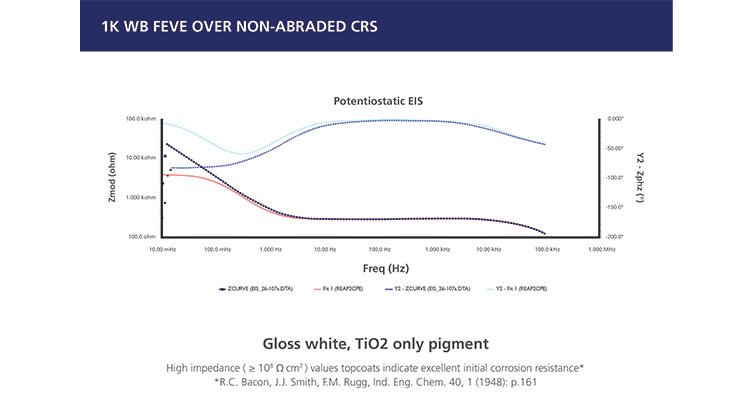 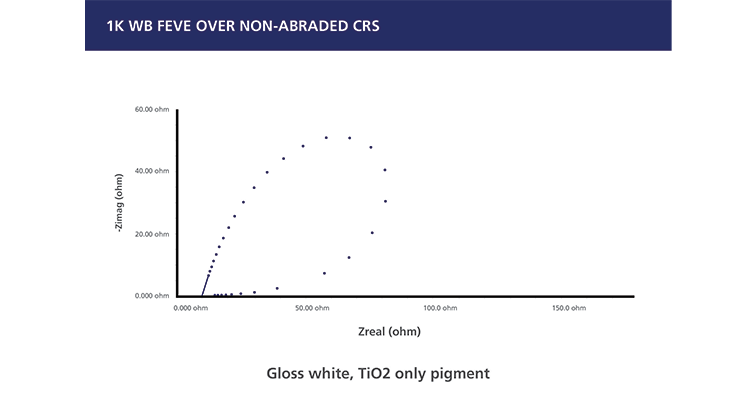 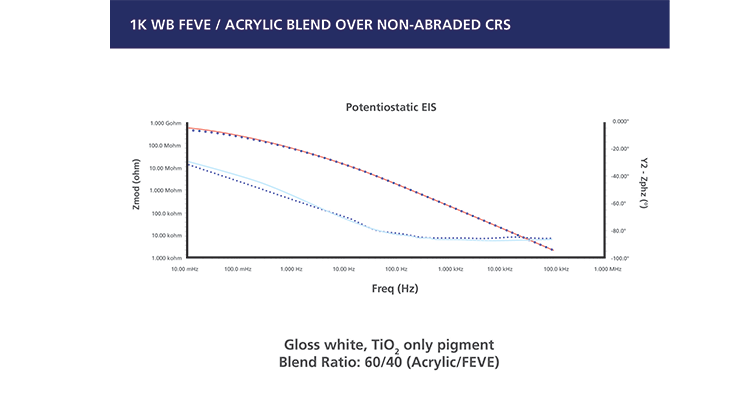 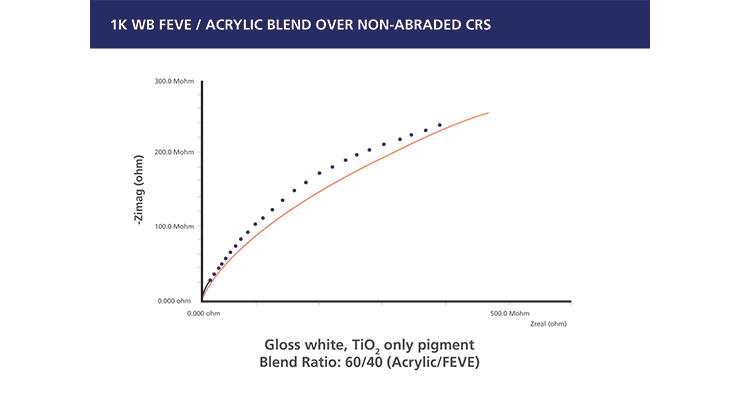 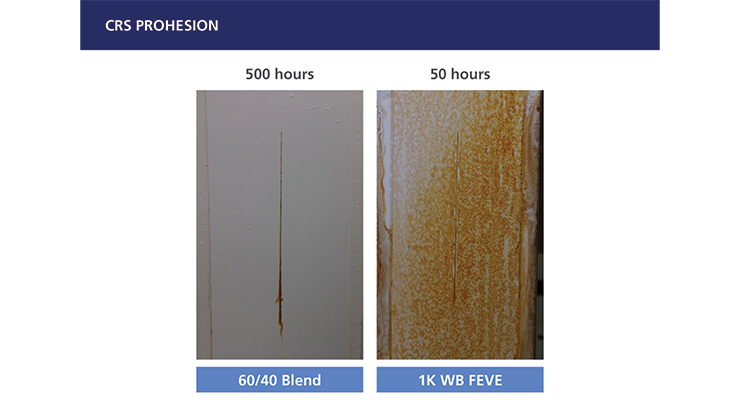 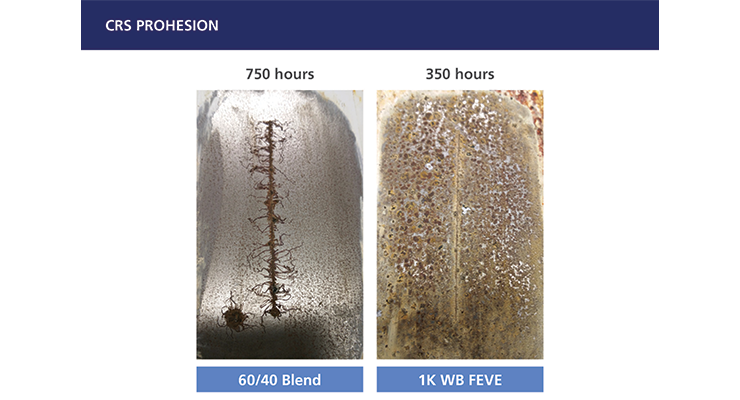 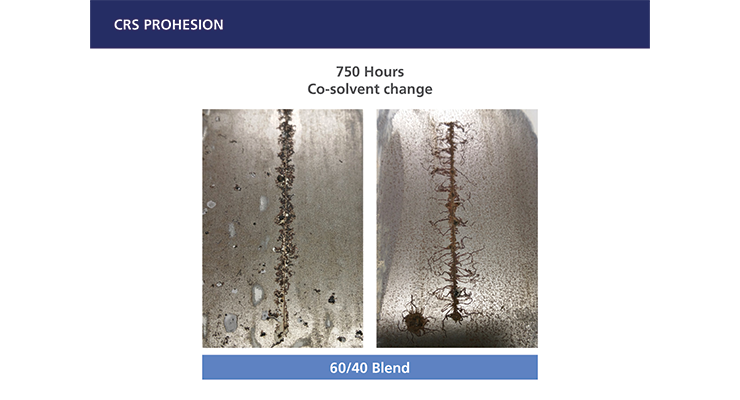 Waterborne coatings are becoming popular because they are more environmentally friendly than other formulations. Although waterborne coatings are commonly used in architecture for aesthetics purposes, their limitations often prohibit use in industrial applications where high performance is required.

Fluoroethylene vinyl ether (FEVE) water-based resins are unique because they weather as well as solvent-based FEVE coatings. These water-based resins were introduced to the market over a decade ago. Since then, they continue to evolve in their ability to enhance high-performance, low-VOC coatings.

The research presented in this article evaluates corrosion inhibitors with blends of various waterborne acrylic and FEVE resins for improved adhesion and appearance after UV exposure and corrosion testing when applied as direct-to-metal (DTM) coatings without primer. Accelerated outdoor UV exposure, electrochemical impedance spectroscopy and cyclic salt fog/UV exposure were used to evaluate corrosion resistance along with gloss and color retention.

Fluoropolymers, like PVDF (polyvinylidene fluoride), were used in paints prior to the introduction of FEVE resins to the market. PVDF resins are still widely used today. In order to utilize these more traditional fluoropolymers, like PVDF, in liquid coatings, blending with other resins such as acrylics is needed. Special solvents are required to solubilize the blends, and ultimately heat is used to help the system flow and form a thermoplastic coating film.

In contrast, the FEVE polymer was designed to have inherent solubility in conventional, widely used solvents via vinyl ether monomers. The chemistry of the FEVE polymer also is fully amorphous, unlike the PVDF-acrylic systems that are semicrystalline. This amorphous morphology allows FEVE resins to form films without heat. The implication of this property is considerable. The introduction of FEVE fluoropolymers to the coatings industry brought extremely durable fluoropolymer coatings out of the factory and into the field.

The fluoroethylene groups are the strength of the FEVE resin (Figure 1). These groups are what make this class of polymers so resistant to UV degradation. The C-F bond is strong. The energy of this bond is ~486 kJ/mol2, while the energy of UV radiation at 300 nm is ~399 kJ/mol. The alternating pattern is critical for the extreme UV resistance properties. The chemically stable and UV-resistant fluoroethylene unit sterically and chemically protects the neighboring vinyl ether unit.

In electrochemical impedance spectroscopy (EIS) testing, alternating current (AC) voltage is applied at different frequencies to the sample, and the current is measured. Evaluation involves fitting raw data to electrical circuit models. This can determine the contribution of various frequency-dependent components such as capacitors, constant phase elements (CPE) and Warburg diffusion elements.

The advantages of EIS testing include nondestructive evaluation with low voltage and relatively short time requirements. Other benefits include the ability to progressively monitor the effect of formulation changes, substrate treatments, corrosion resistance, and water absorption.

For our EIS testing, we selected waterborne emulsion grades of acrylic resins and formulated gloss white TiO2-only (with no extender pigments) coatings. We examined the effect of cosolvent use level and selection on the initial coating impedance, hardness development and overall film formation. Testing conditions are shown in Figure 6.

We made a resin-free TiO2 pigment dispersion (Figure 7) to use for the gloss white DTM formulations. A gloss white FEVE blend is shown in Figure 8.

The high impedance (108 ohm cm2 @ 0.1 Hz) values for 1K FEVE emulsion blends with Acrylic 1 indicate excellent initial corrosion resistance (Figure 10). For reference, the Bode plot displayed in Figure 11 and the Nyquist plot in Figure 12, illustrate a near perfect, non-pore coating. In Figures 13 and 14, we see that the absence of free hydroxyl groups hinders the 1K FEVE emulsions direct-to-metal adhesion resulting in low impedance. The blends of the 1K FEVE waterborne emulsion with Acrylic 1 show excellent overall impedance behavior (Figures 15 and  16).

Prohesion testing [ASTM D5894] over cold-rolled steel showed that the 60/40 acrylic/WB FEVE blend resisted corrosion after 500 and 750 hours better than the 1K WV FEVE. In Figure 18, the coating is chemically removed to show the corrosion under the film. We suspect that improvements in film formation are the cause of the differences in Figure 19. The only change made was the selection of cosolvent.

These tests demonstrated that the 1K WB emulsion FEVE DTM corrosion performance over CRS is markedly improved with the addition of certain acrylic emulsions. They also showed that 1K WB FEVE resin blends, with the acrylic emulsions selected for this study, exhibited higher gloss and color retention over the acrylic resin alone.

Based on the information gained through this research, the next steps will be to continue evaluations over blasted steel with active inhibitor pigments. We will also evaluate the effects of various extender pigments and new wetting-aid surfactants.