This annual event featured presentations on a variety of topics related to surface coatings. 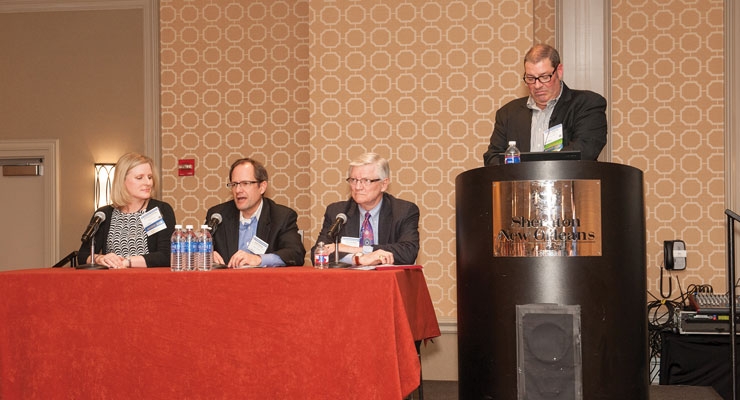 The School of Polymers and High Performance Materials at the University of Southern Mississippi (USM) held the 42nd Annual International Waterborne, High-Solids and Powder Coatings Symposium February 8-13 in New Orleans, Louisiana. The Waterborne Symposium is a technical forum for environmentally-friendly coatings technologies. Proceeds from the symposium are used by USM for various elements of academic program development including junior faculty development, graduate student stipends, equipment acquisition and maintenance, and especially scholarships for undergraduate students majoring in Polymer Science. Most of these students enter the coatings or related polymer industries upon graduation. These scholarships are key to USM’s efforts to recruit the highest-achieving students into their Polymer Program.

Coatings are an integral part of modern society since they provide both barrier and packaging applications in its basic function. Many types and classifications of coatings can be differentiated by formulation, method of deposition or industry. According to Advincula, it is useful to think that coatings are essentially nanoscopic phenomena that have been translated to macroscopic visibility.

“Nanostructuring enables the development of new coatings and function since it alters the way a coating is able to function at the interface in its most ultrathin form,” explained Advincula. “This can be by way of morphology, patterning, templating, etc. The chemistry or composition of the coating can be synthesized or formulated in such a manner that they are congruent with stimuli-responsive, self-healing or highly efficient properties. One particular combination of nanostructuring at the interface combined with new chemistry is the adaption of different polymer brush methodologies by grafting.”

The presentation summarized the science and engineering behind many functional and nanostructured coatings produced by the Advincula Research Group (ARG) through the years. The focus has evolved from ultrathin film to bulk thin film phenomena.

Featured guest speakers at this year’s event were Victoria Gelling, technical director at The Valspar Corporation who presented “Electrochemical Investigations in the Development of High Performance Coatings” and Michael Koerner of Axalta Coatings Systems, who presented “Extensional Rheology as Related to Paint Atomization.”

According to Gelling, in the past, corrosion and coatings research has been a visual study.  A survey of ASTM methods for corrosion detection of coated surfaces illustrates the emphasis on the visual assessment of corrosion detection. This has begun to change.

“EIS, SECM, SVET, along with the many other electrochemical techniques, provide information that is far superior to the historical visual corrosion assessment,” she added.  “For example, small changes in capacitance and resistance of a coated sample can be monitored via EIS and small current densities resulting from corrosion redox reactions can be measured via SVET.  The changes is capacitance and resistance determined via EIS can occur due to water ingress as well as changes in barrier protection.  The current densities measured by SVET can provide a quantitative measurement of the rate of corrosion.”

The presentation featured a review of electrochemical techniques for corrosion and material degradation assessment, along with real-world results of the use of those techniques to study a next generation powder coating.

Koerner explained that formulators understand that improved application can be achieved by modifying the shear rheology of paint to be somewhat pseudoplastic and thixotropic.  Axalta Coatings has been interested to find methods to measure extensional rheology that we believe more directly relates to paint atomization.  “When these methods are fully developed, we believe formulators can more precisely tune paint rheology for optimal application,” he said.

Studies using the Capillary Breakup Extensional Rheometer (CaBER) have been used to demonstrate capillary thinning and filament formation.  This is consistent with observed droplet formation during paint spray.  He said that Axalta recognizes some limits to this approach as a result of relatively low relaxation times observed in commercial paints.

“Current work is to then use these material properties to predict suitability for spray atomization,” he said. “We are using shadowography methods to collect sprayed droplet particle size distributions. If the rheology has been correctly described, then it should directly relate to the quality of spray.”

As a result of substantial developments in the area of carbocationic polymerization, the polymerization of novel biobased vinyl ether monomers possessing unsaturated groups in their side-chains was enabled.

“Linear vinyl ether polymers with narrow molecular weight distributions were obtained from novel vinyl ether monomers derived from a variety of renewable resources including plant oils, eugenol, and cardanol,” said Chisholm. “By appropriate choice of the polymerization system, living polymerization was achieved and unsaturation derived from the renewable resource was preserved in the polymer.  By preserving side-chain unsaturation, crosslinked networks were achieved through an oxidative mechanism.  In addition, the unsaturation was derivatized to other functional groups that enabled the production of coatings through a variety of crosslinking mechanisms.  Further, it was demonstrated that these biobased vinyl ether monomers could be readily copolymerized with other monomers to produce a wide array of functionalized copolymers useful as binders for coatings.”

The Student Best Paper Award sponsored by the SSCT went to Katrina Knaeur for her paper titled, “Controlling Surfaces of Sulfone Polymer Films with Chain Rigidity and Viscoelastic Behavior.”
The Siltech Innovation Award was given to Kristin Blankenship of AGC Chemicals America for “Formulation Techniques Using FEVE Resins in Waterborne and High Solids Coatings.”
Luis Chua and Tyler Woldansk were the recipients of the Sidney Lauren Memorial Scholarship.

Following the success of last year’s Automotive Panel, this year’s Symposium featured a Architectural Coatings panel discussion which was, once again, chaired by Dale Pritchett, publisher of Coatings World.

Architectural Coatings is the largest segment in the global coatings industry. This year’s panel focused on the business and trends that impact this market. Attendees had the opportunity to hear first hand from major architectural coatings manufacturers on how their company succeeds in this dynamic market.

The panel was comprised of Dr. Phil Phillips, president of the Chemark Consulting Group; Dr. Victoria Gelling, technical director of Valspar Corp. and Dr. Kent Young, director of technology of the The Sherwin-Williams Company. The panel concluded with a Q&A session with the audience.

The 2016 Waterborne Symposium will be held January 31-February 5.

The School of Polymers and High Performance Materials at The University of Southern Mississippi has issued a call for papers for presentation at the 43rd Annual International Waterborne Symposium, February 1-5, 2016 in New Orleans. Papers should relate to new and emerging technologies related to materials, processes, production, characterization, application and markets in the field of surface coatings. All papers should be original and represent recent advances in coatings science and related disciplines. Title, abstract and author’s names (speaker’s name underlined) should be submitted by mail, fax or e-mail no later than Aug. 15 to School of Polymers and High Performance Materials, The University of Southern Mississippi, Box 10063, Hattiesburg, MS 39406-0063; 601-266-4475; Fax: 601- 266-6265; E-mail: waterborne@usm.edu; Web: www.psrc.usm.edu/waterborne.
Related Searches
Related Knowledge Center