New markets in the Mediterranean have opened up for AkzoNobel following the completion of a new salt packing facility in Spain through the company's Sal Vesta S.L. joint venture with ICL Iberia.

Located in Súria, the facility is being used for tableting and packing high purity salt, which is a co-product of ICL's potassium mine. AkzoNobel will market and sell the full volume of salt specialties produced, allowing it to serve new markets in the Mediterranean region.

"High purity salt is in demand for the electrochemical industry, and for the food, feed and water treatment sectors," explained Nils van der Plas, General Manager of Salt at AkzoNobel. "With the opening of the facility in Súria we are fully set for growth in southern Europe."

Under a long-term agreement, up to 1.5 million tons of high purity vacuum salt will be produced annually at the site, using AkzoNobel technology and know-how. ICL is investing in two salt production units which have an annual capacity of 750,000 tons each. The first is already fully operational, while the second is planned for 2021. Production at Súria will increase AkzoNobel's total vacuum salt capacity to 7.5 million tons annually.

Commenting on the new facility, Carles Aleman, CEO of ICL Súria & Sallent and Vice-President of Potash Spain Operations, said: "This new plant is another step on the path towards sustainable mining and a clear example of the multiplier effects that our project is providing to the industry in Central Catalonia."

Added Thierry Vanlancker, AkzoNobel's Executive Committee member responsible for Specialty Chemicals: "By cooperating with ICL Iberia, we have managed to turn a by-product stream into a valuable source of raw materials with limited additional investment. This is a perfect example of opening up new markets based on an asset-light growth strategy."
Related Searches
Suggested For You 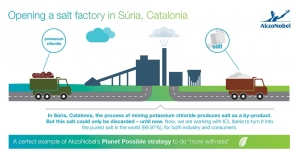