All segments of this market are expected to grow steadily, particularly in Asia-Pacific. 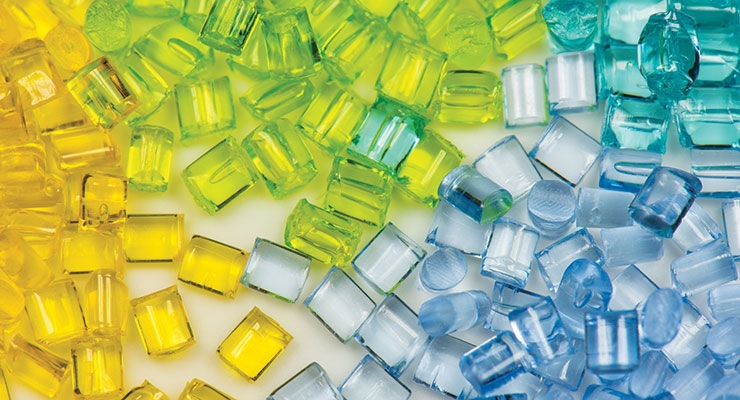 The resins market, which suffered enormously as a result of the 2008 economic downturn, has been consistent in its recovery and is expected to continue growing through at least 2020. Multiple reports published in 2015 and early 2016 indicate that the resins market – inclusive of segments such as acrylic, adhesive and UV-curable resins – is enjoying a healthy resurgence in mature markets, as well as explosive growth in the Asia-Pacific region.

“The factors driving the growth of the global market include stringent government regulations on emission norms and increasing demand from electronics market,” the report stated. “The government regulations have become more stringent over controlling the release of VOCs in the environment. Traditional inks, adhesives and coatings contain hydrocarbon solvents, and upon curing (normal as well as through heat), release hydrocarbons into the atmosphere.

According to the report, many substances, such as PVC-based adhesives are being gradually phased out from the usage, especially in the European region and the U.S. The radiation curable adhesives, inks, and coatings, with electron beam (EB) and UV as the two sub categories that emerge as viable alternatives here, due to zero or no emissions. Within radiation curable ecosystem, UV curable products are further advantageous, as these products can be cured with UV rays, thus leaving very less impact on the environment.

“For these very reasons,” researchers added, “the UV resins based coating systems is also the fastest growing segment within the green coatings ecosystem. Waterborne coatings, powder coatings, and high-solids coatings are the other types of green coatings. Even within the radiation curing systems, the waterborne UV curable systems are gaining traction, when compared to conventional radiation curing systems.

“The current impact of this driver is high on the growth of the market, and is expected to further remain high during the forecast period, as the governments of various countries continue to realize the negative impact of traditional VOC emitting systems, and are looking forward to replace them with more sustainable systems.”

In terms of the adhesive resins market, the global market value is estimated to be $11,339.66 million in 2015 and is projected to grow at a CAGR of about 4.88 percent between 2015 and 2020, according to Markets and Markets. Applications for this segment include automotive, packaging, industrial and others. The construction sector, automotive market, and medical adhesives have all seen growth or resurgence that is contributing to a projected increase in the world-wide market for adhesive resins.

“These companies are consistently focusing on expanding their production capacity to achieve a competitive advantage and thereby serving the customers more effectively,” the report states. “New product launches were the most preferred strategies by the top players in 2014 that were driving the demand of adhesive resins. Their strategy to capture the untapped market in developing economies includes agreements, collaborations, and joint ventures.”

Asia-Pacific is the biggest and the fastest growing region for adhesive resins due to the growing demand for adhesives and sealants in India, China, Japan, South Korea, and Australia. North America is a matured market and is expected to grow with a low CAGR till 2020.

The acrylic resins market is also expected to grow, and has been predicted to be worth $15,973.8 million by 2019. Markets and Markets found that Asia-Pacific, Europe and North America dominated this market and accounted for over 85 percent and 75 percent of the market, by volume and by value respectively.

The developing regions dominate the acrylic resin market due to growth in related segments, researchers concluded.

A Market on the Upswing

“However, this was offset by continued strong unit turnover and property upkeep demands in the multi-family market, as a result of increased mobility of renters.  The industrial resins market continued its slow recovery, with the automotive market being particularly strong again in 2014,” he said.

According to Julie Fuell, coatings sales director at Reichhold Corporation, “Certain pockets of the market have continued to show signs of recovery, while others continue to struggle due to the low cost of crude oil and derivatives. Automotive has been exceptionally strong, agricultural and oil field continue to struggle, and housing and construction continues to trend in line with GDP growth.”

“Environmental regulations and social change for sustainable raw materials with less environmental impact are driving rapid change and innovation in all segments of the coatings market,” he said. “The trend is well established in Europe and the United States, but is quickly growing in other regions, including China, which have developed new regulations designed to improve air quality and reduce VOC emissions. This has required paint producers to transition from solvent to waterborne or low-VOC formulations. The ever growing importance of waterborne technology has created exciting innovation opportunities for resin manufacturers.”

In addition to meeting environmental regulations, resins customers frequently have technical requests for their suppliers.

“Thinner films dry more quickly, or at lower temperatures, allowing production lines to run faster and ovens to be set at lower temperatures.  In 2015, Lubrizol introduced Permax V1000, a vinylidene chloride acrylic resin, to meet this demand. This resin can be used in coatings that have corrosion protection at 1.5 mil (38 microns) dry film thickness equivalent to other products that require a dry film thickness of at least 3.5 mil (89 microns) to achieve this level of performance,” he said.

Schnieders added that another common demand is for resins that are more environmentally-friendly. To meet that need, the company introduced a non-halogen flame retardant acrylic, Hycar NH 3069. “This resin imparts flame retardancy to cellulosics without the use of additives or halogenated materials. Media properly treated with Hycar NH3069 will pass NFPA 701 vertical and MVSS302 horizontal burn testing,” he said.

He added that in the last two years, Lubrizol has also introduced several resins for filtration media that do not contain, or produce, formaldehyde.

“They are seeking resins that can stick to anything, including poorly prepared substrates. Direct to metal continues to be a major focus with expectations that single coat systems must perform at the level of multi-coat systems,” he said.

In order to balance customer demands with rising costs associated with manufacturing resins, Hall said that BASF understands that its customers are “critical to our success.”

He continued, “We strive to communicate as quickly and openly about our capabilities to meet their demands. We strive to be realistic in our response and deliver on that response. Cost is always an issue, but the value of our customer relationship is a major factor guiding our actions in the market.”

Over the last several years, global environmental regulations have led to the need for increasingly lower VOCs. In order to meet the demand for these products, suppliers have introduced several new “green” technologies to the market.

Daikin America has developed a low-VOC, solventborne fluorourethane as well as a waterborne 2K fluorourethane with similar performance as the solventborne. According to Pierre Kuyl, business development manager, Surface Modification Technologies, the products offer a lower life cycle cost by reducing the frequency of re-coating, which will have a positive impact on the environment.

“In certain formulations, low-viscosity, 100% solids epoxy resins are being used in place of higher-molecular-weight materials, which can lower VOC’s significantly,” she said. “Formulators will often use liquid epoxy resins to this end in high-solids primers, but this extends dry time. Epoxy resins such as EPALLOY 7200 can lower VOC’s by about one-third while also achieving accelerated cure speeds for better economy, plus high-value properties such as solvent resistance and viscosity.”

Vaughn added that certain product offerings are also being used as replacements for particular materials of concern. For example, ERISYS GA-240, a tetra-functional epoxy reactive modifier, can serve as a drop-in crosslinker replacement for polyfunctional aziridine (PFAZ) in coatings and adhesives. PFAZ has been linked with mutagenicity, and ERISYS GA-240 is a safer, non-mutagenic alternative. Since it has a longer pot life than PFAZ, manufacturers can also avoid re-inoculation for better economy.

“Emerald also provides products based on naturally-derived feedstocks, such as ERISYS GE-60, a multifunctional aliphatic epoxy resin based on sorbitol,” she said. “ERISYS GE-60 is a reactive crosslinker that optimizes MEK rubs and corrosion/impact resistance in 2K enamel formulations with carboxyl-functional acrylic polymers, creating a durable acrylic/epoxy coating. Use of bio-based feedstocks is associated with reduced carbon footprint and water usage cradle-to-grave, and Emerald continues to find new ways to source these ingredients when they offer value to the customer and can maintain or even improve product performance.”

BASF’s Hall said that BASF has “the most comprehensive resin, additive and performance additive portfolio for coating manufacturers.”

He added, “Our innovation comprises a full pipeline of new products and technologies as well as exploiting the synergies of our product portfolio to provide a system that delivers the desired performance and conforms to the environmental regulations. We understand that our customers desire the freedom to sell their products in all geographic regions without the need for region specific formulations to meet environmental regulations. We are developing a new crosslinking technology that can displace amino resins, epoxies and isocyanates.”

“Each of these technologies are biobased and supplied at a low VOC. These biobased polymers have the benefit of being applied at a lower molecular weight that increases through oxidative crosslinking, thus allowing performance advantages over alternate petroleum based polymers. Such advantages include good flow and leveling, penetration, high gloss, hardness, adhesion and durability,” Cooley said.

Arkema Coating Resins, according to Hiel, has developed a full array of products that display the EnVia trade name. EnVia products have passed the company’s rigorous certification program to ensure they are suitable for use in formulations for sustainable paints, coatings, adhesives, sealants and construction products. All products that are certified as part of Arkema’s EnVia program meet key requirements, including: having no added alkyl phenol ethoxylate (APEO) surfactants; no added formaldehyde or formaldehyde donors; a total latex VOC < 5 g/L; below regulatory reporting limits for carcinogens, reproductive toxins and ozone depleting compounds; low residual monomer levels (total monomer < 500 ppm); minimizes use of hazardous substances; Green Seal hazardous components < 0.01 percent by per component; California Prop 65 substances are minimized and documented with data available upon request; Hazardous Air Pollutants (HAPS) < 0.1 percent; and no known added phthalates, triphenyl or tributyl tins, 1,2 – dichlorobenzene.

According to Venturini, one of the latest “green” technologies launched by Sun Chemical is a series of products under the WATERSOL line. A group of self-emulsifying acrylic resins developed by DIC for automotive interiors, WATERSOL water-based resins deliver performance properties similar to solvent-based resins and demonstrate excellent corrosion resistance, high hardness, pigment dispersability and low-temperature film formation properties.

“We also recently launched WATERSOL WQS-364, a UV-curable water-based polymer for water-reducible coatings on plastics which contains a hydrophobic multi-functional methacrylate and urethane acrylate core surrounded by a hydrophilic group. This unique technology brings both excellent package stability and a level of chemical and solvent resistance to the cured films not seen with other UV-curable systems,” he said.

For more information on the resins market, see the online version of this article at www.coatingsworld.com.
Related Searches
Related Knowledge Center
Suggested For You