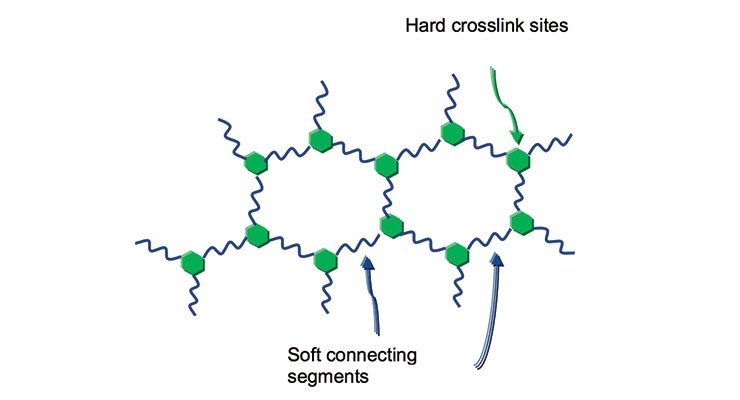 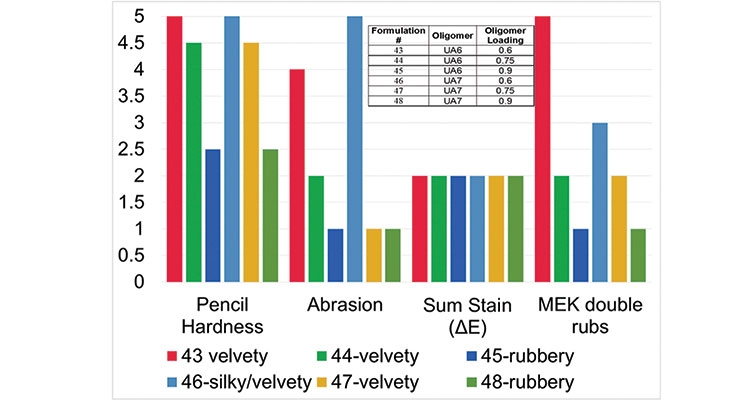 Figure 2: Properties of UA6 and UA7 as a function of crosslinker content. 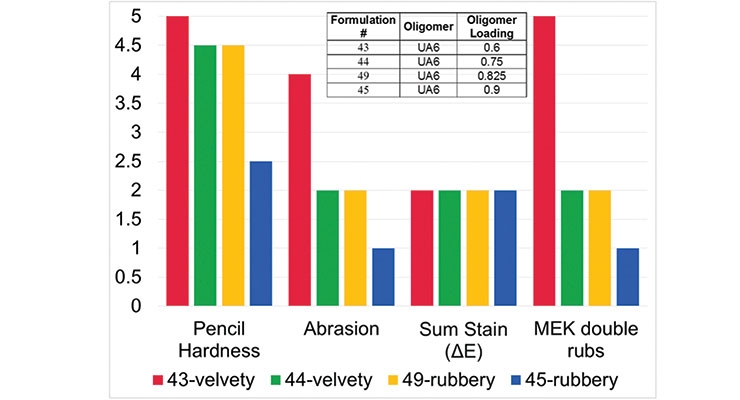 Figure 3: Properties of UA6 as a function of crosslinker content. 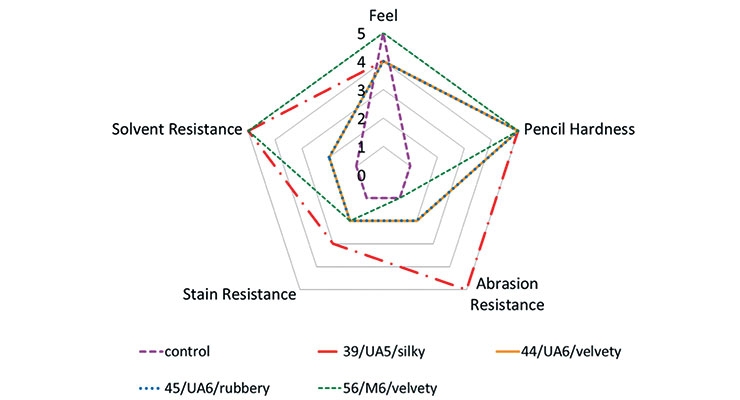 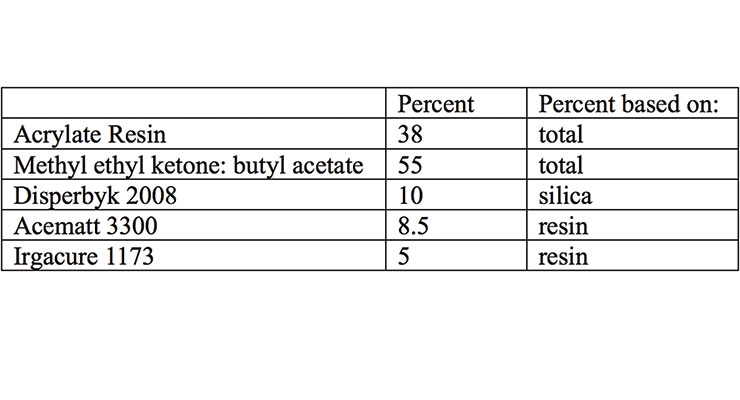 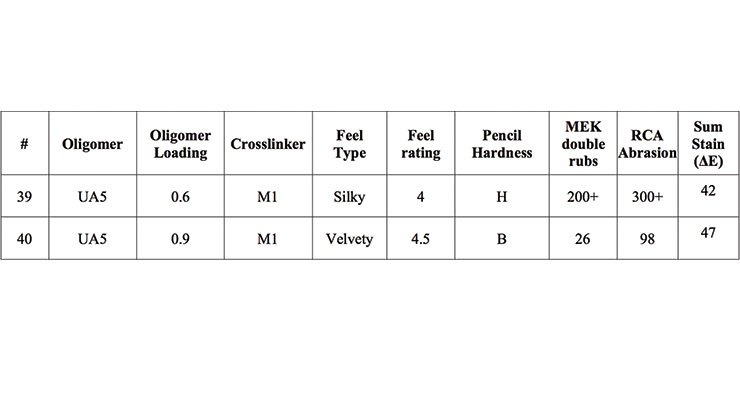 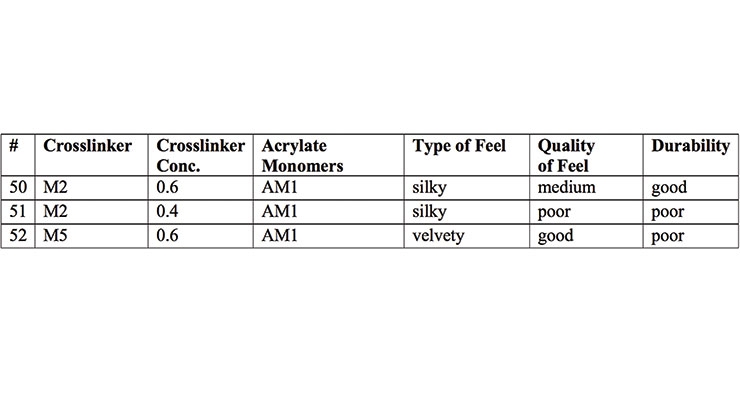 Table 3: Properties for select formulations for crosslinkers with acrylate monomer. 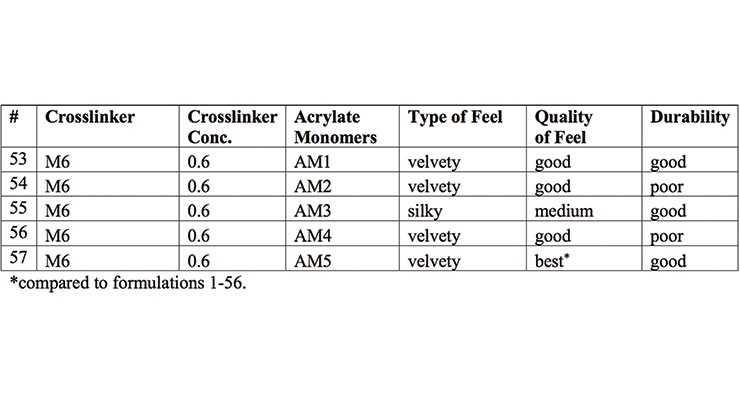 Soft-touch or soft-feel coatings are employed to create a variety of haptic effects on plastic, paper and metal substrates. Haptic effects can improve a consumer’s perceived value of the product, and influence them to buy the product over other similar products. In fact a recent study by California Polytechnic State University showed not only did customers prefer cosmetics packaged in a container with a soft touch coating versus a traditional coating, they were willing to pay a 5% price premium.1 Thus it is no wonder interest in soft-touch coatings has increased in recent years. While the study by California Polytechnic State University focused on cosmetic packaging, soft-touch coatings span a variety of markets including automotive interiors, small electronics, and appliances.

With the broad range of markets comes the need for a broad range of feel types. In general, a feel type is described in terms of things known to be soft, such as rubber, velvet, peach skin, rose petals, silk, leather, suede, etc. Not only are these terms highly subjective, the perceived feel varies from person to person. A coating that one observer might describe as velvety,

another may find silky. Studies have shown that factors such as age2 and sex3 affect how feel is perceived. In a previous lab study we chose observers of various age, sex, and training.4

Although most could recognize a soft coating, their perception of which was the most pleasing varied widely. While we found atomic-force microscopy (AFM) measurements can distinguish between feel types when the coating chemistry was different,4 additional testing showed that as the chemistry became more similar, the relationship between adhesion force and feel no longer held. In addition, AFM cannot distinguish the quality of the feel. Thus, for our subsequent studies we used trained observers to judge the quality and type of the feel effects.

Since consumer products are exposed to repeated wear and contaminants throughout their life cycle, soft feel coatings must also be durable. Balancing soft feel with wear resistance is an additional challenge. Wear resistance for soft feel coatings is typically created by crosslinking multifunctional isocyanates with polyols. This process creates hard regions from the isocyanates distributed in softer regions created by the polyols, as can be seen in the idealized structure in Figure 1. While these two-part systems have excellent feel properties, two-part urethane coatings have disadvantages such as pot life limitations, long cure times, and hazards of isocyanate handling. To address these issues as well as to improve durability, formulators and product designers look increasingly toward UV-cured soft-feel coatings.

In a previous study, inspired by two-part isocyanate systems, we demonstrated our ability to create a UV-curable soft-touch coating with good feel and improved mar, abrasion, stain, and chemical resistance compared to conventional two-part urethane coatings.4 The system created had a silky feel. Achieving soft-touch coatings of various feel types is necessary to fit the requirements of a wide range of applications and products. This article details the development of a range of custom designed UV-curable soft touch products that have tailorable feel and improved properties over two-part urethane coatings.

Table 1 shows a base soft-touch coating formulation. Silica was added as both a surface additive to impart soft feel and as a matting agent. The acrylate resin was dissolved in solvent to reduce the viscosity and to provide enough shrinkage to allow for the migration of silica to the film’s surface, which is necessary to reduce friction and impart a soft feel.5

After applying the formulations, the panels were dried for 15 minutes at 60 °C to remove the solvent. The coatings were then cured with two mercury arc lamps at 400 W/in and a belt speed of 50 fpm resulting in a final film thickness of 2 mils. The panels were allowed to stand overnight before testing for abrasion, solvent, food stain, sunscreen, and insect-repellent resistance, pencil hardness, and adhesion.

Experienced observers rated the feel of the panels by type and quality. We divided the range of observed feel into three regions: rubbery, velvety, and silky. Rubbery describes a coating close to rubber, which has more grip (less slip) than a silky (silk-like feel) coating. A velvety coating has a slip/grip feel between that of rubbery and silky. The observers also rated the quality of the soft touch on a scale of one to five, with one being a poor match and five being an exact match to the coating’s respective feel type.

In our initial screening, we used difunctional urethane acrylate oligomers (UA) to mimic the softer polyol regions in the traditional two-part systems and trifunctional acrylate crosslinkers (M) for the harder isocyanate regions.4 We found that UA5:M1 at 60:40 created a good silky feel with improved durability over the conventional two-part urethane system tested. By reducing the amount of crosslinker, we were able to achieve a velvety feel, but the durability of the coating decreased significantly (Table 2). Since a reduction of crosslinker alone cannot be used to change the feel type while maintaining durability, we set out to design new urethane acrylates and crosslinkers.

In our second approach we attempted to create a soft touch coating with an existing trifunctional acrylate crosslinker and low functional acrylate monomers (AM) as the soft connecting segments instead of difunctional urethane acrylates. Formulations with the existing crosslinkers and monomer (AM1) did not achieve the desired combination of feel and properties (Table 3). Formulating newly designed crosslinker, M6, with acrylate monomer, AM1, at 60:40 crosslinker to acrylate monomer, resulted in both good feel and good durability, as seen in Table 4, formulation 53. After varying the monomer formulated with M6 to screen for improved feel and durability, we found M6 with AM5 had the best velvety feel of all our previously tested formulations (Table 4) along with good durability.

Newly designed oligomer UA6 and crosslinker M6 allow us to create UV-curable soft-feel coatings with a range of haptic sensations (Figure 4). These new products show improved durability over the industry standard two-part urethane coating tested and exhibit little to no decrease in soft-touch feel quality. In addition to enhanced durability, the UV-curable systems have infinite pot life, short cure times and no free isocyanate. Current work focuses on 100% UV-curable and waterborne UV-PUD to provide low-VOC options to formulators and convertors. 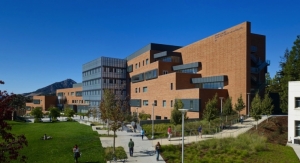