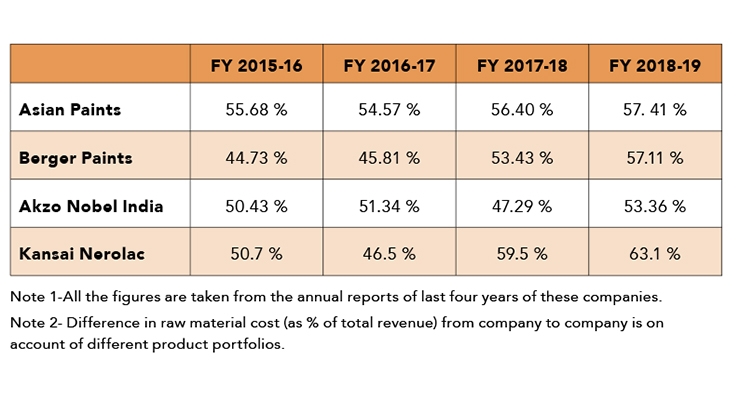 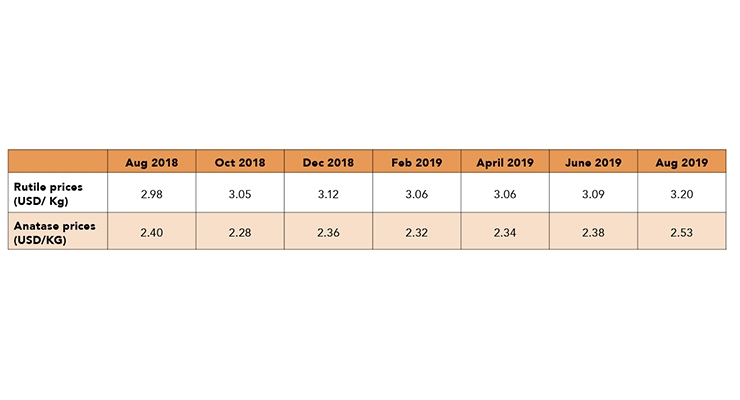 Table 2: Prices of Rutile and Anatase in India

Even under the best of circumstances, raw materials represent a near-constant headache for paint and coating producers. With Middle East Asia simmering with tensions and a global trade war growing more intense, volatile raw material prices have posed severe challenges for the Indian paint and coating industry throughout 2019 and promise to do so into the foreseeable future.

Raw materials are perhaps the most important factor of production for every branch of the manufacturing industry. However, in the case of the paint and coating industry, raw materials play a far greater role due to the raw material intensive nature of the industry.

Even a small fluctuation in the raw material prices has a major impact on the profitability and operations of paint producers.

India, which is entirely dependent on the imports of crude oil and its derivatives, imports almost 90 percent of its raw material requirements for the paint and coating industry suffered heavily on the account of rising prices and uncertainty due to political reasons in the Middle East region. The price of crude oil and crude oil-linked derivatives, such as monomers and solvents, created pressure on Indian paint producers in the 2019. There was nearly a double-digit increase in raw material prices. The prices of rutile and TiO2 also increased significantly during the current year.

Though, in welcome news for the Indian paint industry, raw material prices have started to soften in the last few months. For example, in the second quarter of FY 2020 (July 2019-September 2019) for Asian Paints, the country’s largest producer of paint and coatings, raw material accounted for 57.6 percent of total sales. The figures for the corresponding period in the year 2018 was 60.1 percent.

Speaking during the Asian Paints Earnings Conference Call in late October, CEO KBS Anand said, “Raw material prices have remained benign in the period July 2019-September 2019. However, we will need to watch out for volatility in key raw materials, especially crude and related derivatives.”

Raw materials like phthalic anhydride, pentaerythritol, methyl methacrylate, aromatics, etc., which act as binders, solvents and additives, are derivatives of crude oil. In fact, nearly 50 percent of raw materials used by paint companies are crude oil derivatives and account for about 30-35 percent of the total raw material cost of the Indian paint industry. Volatile crude oil and derivative prices pose a risk to the profitability of Indian paint and coatings producers.

There is a growing tendency among the Indian paint companies to incline towards manufacturing water-based paints which are less sensitive to movement in crude oil prices. Besides, the preference for these paints over solvent paints is also rising among customers because of ease to clean walls and increasing demand of these paints from the building and construction and automotive sector owing to their good corrosion protection and high gloss properties, over other types. This has led to focus by most of the paint companies to consistently increase the share of water-based paints in their portfolio which is expected to aid margin growth in the long term. However, demand for oil/solvent-based paints will always remain, hence exposure to price fluctuations in crude oil cannot be eliminated completely.

Titanium dioxide pigment, forming around 25 percent of the total content of paint, is by far the most important material used by the paint industry due to its whiteness, opacity and refractive index ability i.e. its ability to bend and scatter light. It is commercially available in two forms – Anatase and Rutile. Of these two forms, Rutile TiO2 is more durable and stable and is also considered to be more efficient in scattering light; while anatase pigments are used mostly in cheap dispersion paints, self-cleaning paints and in road marking paints. Application of rutile pigments is much broader and in practice covers all paint types.

Around 70 percent of the India’s domestic demand for TiO2 is met through import deliveries and China is the leading exporter of TiO2 to India. Steady growth of TiO2 production in China in 2018 and first half of 2019 kept the TiO2 prices in check. High volatility in Rupee in 2019 has made the imports costlier for Indian paint producers by a similar amount.

However, domestic production (and prices) of TiO2 is expected to pose problems for Indian paint producers in coming years on account of ban on mining of beach minerals by Indian government. Beach minerals ilmenite and rutile are the basic feedstock for the manufacture of TiO2. Indian government’s ban in 2019 on mining of beach minerals by private companies has affected the whole chain of inter-related connected producer and user industries. It is expected that the real impact of this ban will have a major impact on TiO2 production in the coming year.
Related Searches