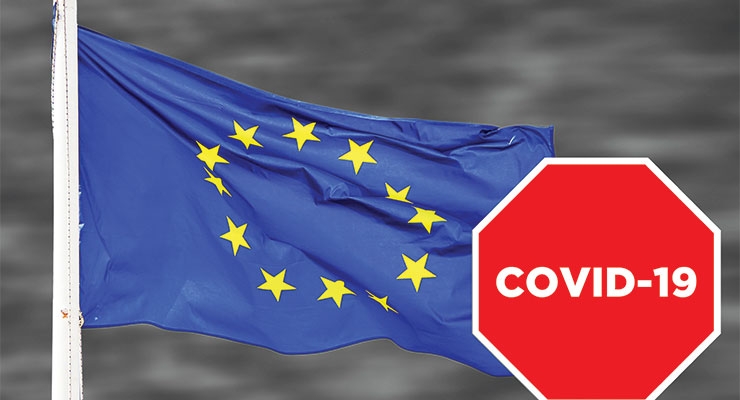 In late March Europe’s coatings sector was facing the prospect of a deep recession caused by the effects of lockdowns throughout most of the region to slow down the spread of the novel coronavirus (COVID-19).

Large portions of the population were ordered to stay at home rather than go to work – if still employed.

Even shops, except those for essentials like food and medicine, were shut.

As a result, demand for coatings virtually collapsed for a period in many areas and seemed unlikely to be revived until governments lifted their restrictive stay-at-home policies to allow their countries’ economies to return to some sort of normality.

Amidst the gloom, the coatings and other manufacturing sectors in Europe have some room for optimism about forthcoming economic trends.

Government economic-aid packages including grants and state-guaranteed loans for businesses and state-subsidized wages to prevent lay-offs should help to slow the decline in manufacturing output, particularly among large buyers of industrial coatings.

Among consumers, government financing of wages should help to ensure that they can afford to do DIY jobs in the coming summer months.

Also, sharp declines in oil prices in the wake of the COVID-19 pandemic is leading to falls in the costs of petrochemical-based raw materials.

‘’Thirty percent of our raw material costs are indirectly related to the oil price,’’ Elisa Markula, chief executive of the Finnish coatings company Tikkurila, said at the company’s annual results press conference in Helsinki in February.

Signs in March that the numbers of COVID-19 cases had peaked in China, where the outbreak started in late December 2019, raised hopes that exports of some key raw materials, like pigments and certain additives, would soon be flowing again.

“It’s likely that, once disruption and uncertainty fade, the rebound in activity will be strong,’’ said the UK-based consultancy Oxford Economics in March. “It’s important for firms to position themselves for such a recovery.’’

The eurozone with 19 member states is heading for “the sharpest recession in its (21-year) history,” according to the consultancy. But after shrinking by four percent in the second quarter, “a quick rebound’’ in the second half of the year will reduce the decline in GDP to 2.2 percent.

The strong upsurge in economic activity across Europe is a trend predicted by many other economic forecasters in the region.

In the UK, for example, which formally left the 27-member European Union on Jan. 31, 2020, Oxford Economics is expecting a three percent contraction in GDP in the first half of the year.

But a subsequent revival in the economy will generate growth of 2.3 percent in the second half and cut the overall decrease for the year to 1.5 percent.

There is evidence of pent-up demand for decorative paints among consumers for whom stay-at-home restrictions are an opportunity to do some DIY.

In many countries, this demand is being frustrated by central and regional governments ordering retail outlets for coatings to close.

In Germany, Europe’s largest coatings market, only a few of the country’s 16 federal states were allowing in March DIY stores to stay open.

“(Prior to the closures of stores) our member companies had actually noticed increased sales of paint,” said a spokesman for the German Paint Industry Association (VdL).

In the UK where DIY stores were being allowed to remain open, retailers were recording a rapid rise in sales in the first quarter of 2020.

Kingfisher, a UK-based DIY retailer with a network of stores across Europe including two large UK chains, reported in an interim trading statement in March a 38 percent jump in UK sales in the third week of the month. This was the time when the UK government’s stay-at-home policy was starting to come into full operation.

On the other hand, professional painters are having a tough time with householders reluctant during a pandemic to have decorators in their homes. In addition, construction sites, except those working on essential projects like hospitals, have been shut down in many countries.

“Besides professional painters, industrial coatings producers are being hit hard by the effects of the coronavirus,’’ said Tom Bowtell, chief executive of the British Coatings Federation (BCF). “Some of their big customers like automobile manufacturers are temporarily closing down their plants in the UK and elsewhere in Europe. There has been a big decline in orders for industrial coatings.’’

Even before COVID-19, the outlook for much of Europe’s coatings sector was a continued decrease or slow growth in sales in many parts of the region, particularly in Western Europe.

In a report in February on the outlook for the German coatings sector, the largest in Europe, the VdL estimated that sales of paints, inks and printing inks sold in Germany decreased by 1.4 percent in 2019 compared to the previous year. It predicted an improvement in 2020 but “only a very slight increase’’ in sales of 0.4 percent.

The coatings companies in Europe to emerge from the COVID-19 pandemic in the best shape are likely to be the multinationals with strong sales both inside and outside Europe and some of the larger regional players such as Tikkurila.

These bigger companies tend to be the ones pursuing current strategies focused on improved margins.

“From the value over volume (strategy) that we were doing, we have been gradually changing,’’ Thierry Vanlancker, AkzoNobel chairman, said during the company’s annual results conference for analysts in February. “We’ve been moving to margin management and margin improvement management.’’

In the execution of their margin management policies, the larger companies are relying a lot on the strong position of their brands whose promotional image is one of quality.

“In countries like Russia consumers have become more aware of the importance of quality,’’ said Markula. “In Russia now higher prices means quality to consumers.’’

Also, many of the European international players, such as AkzoNobel and BASF, which is both a coatings producer and raw materials supplier, have a strong presence in China and elsewhere in Asia where, as the COVID-19 pandemic recedes, there is expected to be a stronger and faster surge in demand than elsewhere.

“Given our substantial business in Asia, the coronavirus may create a shift in demand from the first quarter to later in the year,’’ said Vanlancker. “At this point, we do not expect (our) full year to be impacted in a significant way.’’

Analysts are also currently expecting the multinationals like AkzoNobel and others with large coatings or coatings raw materials businesses to come out of the COVID-19 pandemic comparatively unscathed.

It will be the SMEs who will suffer the most, particularly during an austerity period which will follow the disease.
Related Searches