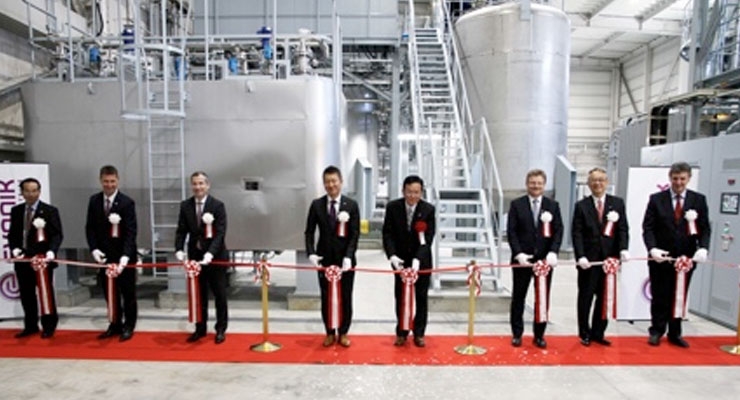 On October 27th, Evonik opened its expanded facilities in Ako, Japan, where the company will produce its SIPERNAT and CARPLEX lines of specialty silicas. The investment represents a roughly 50 percent increase in Evonik’s Japanese production capacity for specialty silicas, which the specialty chemicals company manufactures through DSL. Japan Co., Ltd. (DSL). Evonik maintains a 51 percent share in DSL, a joint venture with the Shionogi & Co., Ltd. in Japan.

“The expansion will allow us to continue providing exceptionally high-quality silica that will support the growth of our customers in sophisticated sectors such as the food, cosmetics, and pharmaceuticals industries,” explained Andreas Fischer speaking at the opening ceremonies; Fischer heads the Silica Business Line within the Resource Efficiency Segment. Applications for SIPERNAT and CARPLEX include their use in beer filtration, as drug carriers in pharmaceuticals, and as flow aids in powdered foods and thickener for toothpastes. “We also anticipate new ideas for other industrial applications, such as paints and coatings, or paper coatings,” Fischer went on to say.

DSL President Tadashi Kanai emphasized how the investment will strengthen the company’s market position: “As the expansion shows, we see growth potential for the high-quality specialty silica business in Japan. Our aim is to strategically enhance our already strong market position. DSL is a reliable partner to its customers, whom we support with intense technical collaboration and highly dependable delivery performance. The new facility also complies with regulatory requirements for direct contact with food in Japan, the EU, the US, and other states, and meets demanding HACCP and GMP quality and safety requirements in Japan.”

Evonik is expanding its global silica production capacities. Following expansion projects in Europe and Asia, Evonik is now constructing a facility in Americana, Brazil, which will be the first plant in South America for highly dispersible (HD) silica, a product used primarily in tires with low rolling resistance. In the spring of 2015, the company began the initial planning stages of a new world-scale production plant for precipitated silica in the United States. The company hopes to finish construction by the end of 2017. The overall project—this would be the largest investment that Evonik has made in North America in the past five years—is still subject to board approval.

Evonik is one of the leading manufacturers of silicas. In addition to precipitated silica, the company also produces AEROSIL fumed silica and ACEMATT, silica-based matting agents. Evonik’s worldwide production capacity for matting agents and for precipitated and fumed silicas is roughly 550,000 metric tons per year.
Related Searches
Suggested For You