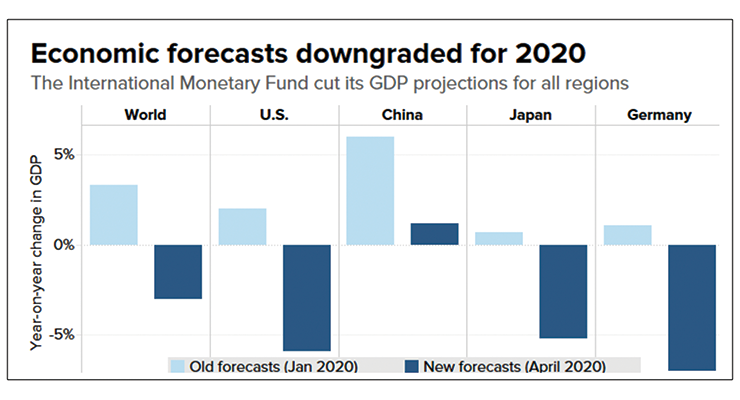 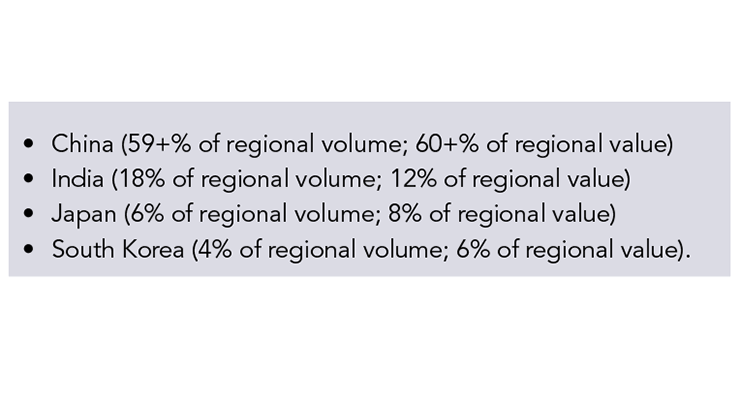 Coatings World: How do you see the current business situation with regard to coatings and adhesive manufacturing in China?

The Asia Pacific (APAC) region consists of more than 50 countries. The combined coatings production in the region represents 53% of the volume and 47% of the value of the global coatings market.

Compared to North America, Latin America or Europe, the APAC region is much more divergent with regards to culture, history, language, or economic development. Even more significant, the size, maturity, technology needs, and growth rates of each country’s coatings market is unique. Of the 50+ countries in this region, just four represent slightly greater than 87% of the entire region’s total coatings demand in both volume and value (Table1).

China represents ~60% of APAC’s entire coatings volume. As such, China is clearly the most important coatings producer and user in the region. India (with 18% of regional volume) is a distant second.

Prior to the pandemic, coatings in China were projected to grow at a rate of about 6.2% compared to 2.5% for North America. Obviously, the pandemic has changed all these projections for 2020. Overall, the International Monetary Fund expects that the global economy will shrink by 3% in 2020. Only a select few economies such as China and India are expected to show some growth this year (Figure 1).

CW: How do you forecast China’s future as a global leader in the coatings market?

China has maintained its global coatings leadership position for two important reasons: It is a leading manufacturer of coated goods exported to countries throughout the world, particularly to the U.S. and western Europe; and it is responding to increased domestic consumption as it and its component countries raise their standards of living.

Citing the impact of the coronavirus , China’s largest auto manufacturing group warned in mid-May that new vehicle sales could fall more than 10% in the first six months of 2020 and by about 5% for the full year. This could amount to one million vehicles not being produced. The impact goes further than that, Hyundai is suspending production in its South Korean plants because of a shortage of Chinese-made parts. European car manufacturers likely will also be hit hard by shortages of parts to feed vehicle assembly lines.

In essence, the supply chain in all industries has been disrupted. This has affected not only Chinese producers but the rest of the world that depends on Chinese manufactured parts.

CW: What has been the impact on market demand for coatings and adhesive products?

According to most reports, 91% of the more than 500 Chinese companies recently surveyed had reopened by early May. About three-quarters of these companies were working on-site again. Just 42% of them were able to operate at more than half their capacity.

Worse, the demand for goods and services from Chinese companies has plummeted. Foreign orders have fallen more than twice as fast as domestic ones. Orders from the U.S. dropped the most among China’s major trading partners. With all of this happening, the Chinese government has not yet admitted that they’re not likely to hit their 6% GDP growth target for 2020, even though “mathematically that cannot be reached in any scenario.” The simple fact is that information released by China will most likely have been massaged.

From my perspective, the coating and adhesive markets in China will experience a tepid pace of activity through the remainder of 2020. China relies on a strong and vibrant export market as its domestic market is still evolving. The coronavirus has essentially shrunk the single largest source of economic growth (exports) for the Chinese and that won’t change in the near-term.

In addition to the lack of domestic and global market demand, you now have countries like the U.S. confronting China about the manner in which they handled the coronavirus outbreak. We have seen and will see more political posturing on all sides combined with a lot of finger-pointing.

In the U.S., there is a bipartisan push to craft bills that will decrease U.S. reliance on China-made products. The medical supply chain and defense-related goods are at the top of the list of products to move back to the U.S. to produce. There is talk in Washington about providing financial incentives (up-front relocation cost or tax breaks) for any company that wishes to shut down in China and return to the U.S.

CW: How does Blairgowrie see the M&A picture look for companies considering business expansion their business in the region?

Somewhat similar to the business sector, M&A activity in APAC hit a major decline as a result of the coronavirus. Asia dealmakers report a 7-year slump in M&A activity (a decline of 20% in Q1).
Deal value across the APAC region was estimated at $177.4 billion (down 20%) in the first three months of 2020 versus the same period a year earlier. Deals involving China, where the virus was first reported at the end of last year, dropped 16% and remain sluggish.

Bankers and other advisers, fearing a prolonged hiatus in headline mergers and acquisitions, are turning to other forms of activity. Governments worldwide are restricting movement to curb the spread of the virus. This has significantly limited travel and face-to-face meetings and, in some cases, making them nearly impossible.

This trend is likely going to persist for the greater part of 2020. Based on feedback from various sources, there are numerous “bargains” available in APAC and especially inside China.

However, few deals are being completed as potential buyers are concerned as to whether or not today’s value is the right value to consider for a potential acquisition.

Some buyers are contemplating triggering material adverse change (MAC) clauses in deal agreements that can allow them to walk away, renegotiate or delay if prices fall. Others, eyeing asset value shifts, may want to have epidemic- or pandemic-related clauses added to the contracts.

In APAC, one of the more aggressive buyers happens to be “CHINA.” Even though the virus situation continues in the region, China is making strong overtures to acquire vulnerable assets around the region, especially in India.

Although not dead, the APAC will require a lot of time to return to any level of “normalcy” in regard to mergers and acquisitions. For investors who are committed to being in APAC, this will become a major stumbling block to their plans. Given the current “poor” relationship between the U.S./Europe and China, it is likely to curtail significant acquisition work inside China in the near-term.

My opinion is that there may be a few acquisitions in the region/China in 2020 but serious return to pre-2020 activity levels will not happen until 2021 and beyond.

CW: Looking on the bright side, what do you see going forward for China’s chemical industry?

Despite these hurdles, some of the biggest players in the chemical industry are continuing their investments in the country with some mammoth projects. China has dominated the global chemical industry for the past two decades and this trend is expected to continue soon. Despite the many challenges which this country has faced, China remains a driving force in the world market.

Does this mean that the glory days are over for China and that investors should be more cautious when considering China as a growth objective and a site for future investment? Difficult to say at this point.  It is clear that the U.S. will be taking a hard view at continuing to allow China to be the sole source of critical items such as pharmaceuticals, medical equipment, etc.

I don’t think the attempt by the Chinese leadership to blackmail the U.S. into silence was received very well by most U.S. citizens. You might say the next move is sort of up to China. What the Chinese say and do will set the future tone and composition of future relations between the U.S. and China.

China doesn’t want to lose its leadership position, but the coronavirus has weakened them in the eyes of the world.