As a major downstream market for anticorrosion coatings, the ship building industry of China has entered its winter season in the recent two years. Oversupply is the key problem, which caused several ship building companies such as Sainty Marine to declare bankruptcies in 2015, and it is estimated that more ship building companies, especially private ship builders who are difficult to win the contracts from government agencies and militaries, will not survive in 2016. And new ship orders will be more and more taken by a few state owned ship builders in China. Following this new trend, the concentration of anticorrosion coatings’ production capacity into several major players has been apparent in China recently. This phenomenon is verified by the capacity and sales volume increase of several foreign anticorrosion joint ventures, who are the major players in the Chinese market.

On June 30, 2015, COSCO Kansai opened a new plant in Shanghai Jinshan Industrial Zone II. The new plant, which has an area of more than 90 acres and a total investment of approximately RMB 500 million, mainly offers container coatings and industry heavy-duty anticorrosion coatings. As disclosed by COSCO, the demand for their container coatings rebounded because of the growth of new build containers during the first half of 2015. Meanwhile, COSCO Kansai successfully explored new customers while further strengthening its relationship with existing customers. COSCO and Japan Kansai have established three joint venture companies in China, located in Tianjin, Shanghai and Zhuhai of Guangdong province respectively.

Jotun COSCO, a joint venture formed by COSCO and Norway Jotun, is mainly engaged in the business of marine coatings. In the first half of 2015 Jotun COSCO put greater efforts into marketing, and therefore maintained its leading position in China’s marine coating market. In addition, to achieve a larger economy of scale, Jotun COSCO Marine Coatings (Qingdao) Co., Ltd. also put a new plant into production in 2015. The total investment of the new plant is RMB 316 million, and its annual production capacity is 67,500 tons per year, which, as COSCO said, is the largest and most advanced marine coating production factory in China.

Hempel, another major anticorrosion coatings producer in China, also has three plants in China, located respectively in Guangzhou, Kunshan and Yantai. Besides positioning its production base into three major regions in China mainland, Hempel opened its China’s second R&D center in Kunshan, Jiangsu Province in 2015, deepening the company’s exploration and development of the China market. Yantai R&D center will serve as its regional R&D center, which is different from Hempel’s four major R&D centers, located respectively in UK, Denmark, Spain and Guangzhou, China.

As disclosed in the interim report of COSCO, the total coatings revenue of the two COSCO joint ventures has increased by 1% and operation profit 6% in the first half of 2015. Although the growth is not two digits any more, we can find by digging a little deeper into each category’s performance that a total of 7,425 tons of the industry heavy-duty anticorrosion was sold in H1 of 2015, representing an increase of 14% over H1 of 2014. Besides, COSCO Jotun sold a total of 53.7 thousand tons marine coatings, increased by 49% over H1 of 2014. And 77% of the marine coatings sold went into the new built ship category. These numbers, coupled with the changes in marine coatings’ downstream market, verify the happening of the trend of capacity concentration in China’s anticorrosion coatings market.

In 2015 Chinese coatings producers, especially those focusing on solvent-based coatings production, have been dealt with a head-on blow by a new coatings consumption tax policy released by Ministry of Finance and the State Administration of Taxation. Finance Tax (2015): Notification on Imposing Consumption Tax on Battery and Coating Products released in January, 2015 imposes a 4% tax to coatings manufacturers on the invoice price of the coating whose volatile organic compounds (VOC) level exceeds 420 g/l. According to the notification, the new tax will be collected by local tax bureaus, and VOC levels will be examined by provincial quality inspection agencies.

The consumption tax is not the only regulation which has a big impact to the coatings producers. Some regulation affects the coatings industry indirectly, if not directly. But one thing for sure is that the pressure from the public for the government to address air pollution in major cities, such as Beijing, has never been seen before. As a result of this, Beijing has become the first city in China to impose fees to the manufacturers of furniture, petrochemicals, automobiles and electronics in Beijing for emitting VOCs, a source of air pollution. The new regulation has been put into effective since October 1st, 2015 in Beijing. It says the polluters will be charged 10 yuan per kg of discharged gas if their VOC emissions do not exceed 50 percent of the city’s limit, and will be charged 20 yuan per kg if the companies whose emissions are higher than half of the limit but do not exceed the standards. Polluters whose VOCs emissions pass the limits will pay 40 yuan per kg. Packaging and printing as well as production of coatings and ink are clearly listed among the 17 industrial categories that are covered by the new regulation.

As more and more provinces and municipal cities release their own policies about VOC emission, the environmental protection pressure on the shoulders of coatings producers can only be seen on the rise in the near future. Unlike architecture coatings market, in which a big part of their products are waterborne, the anticorrosion coatings segment, still depends on solvent-based varieties for meeting the demands of many of their applications. It is predicable that the anticorrosion coatings producers need to develop more environment friendly technologies, put more waterborne varieties into their product portfolio, or just quit the market if their transition is not quick enough.
Related Searches
Related Knowledge Center
Suggested For You 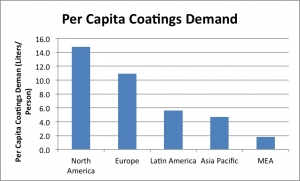 Asia Continues to Lead the World in Coatings Growth