Preliminary plans call for Sherwin-Williams to invest a minimum of $600 million to build both facilities. 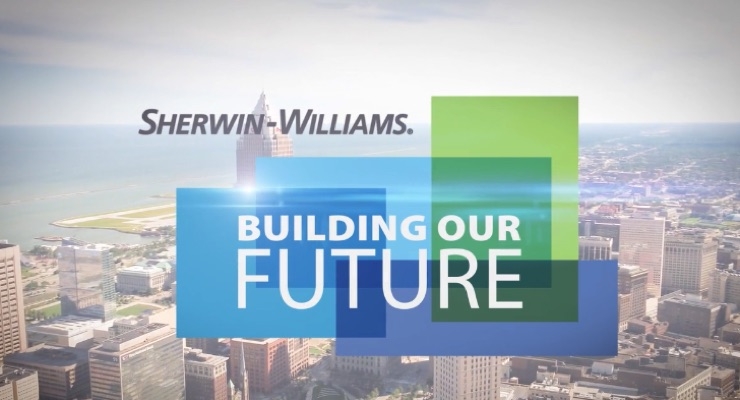 The Sherwin-Williams Company announced it is finalizing plans to build a new global headquarters in downtown Cleveland and a new R&D center in the Cleveland suburb of Brecksville.

“Our plans to continue investing in Cleveland and Northeast Ohio build on our 154-year legacy as one of the region’s top employers and drivers of economic activity,” Sherwin-Williams Chairman and CEO John G. Morikis said. “Driven by our continued need to serve our customers at the highest level and retain and attract top talent, we intend to create a next-generation workplace environment that ignites creativity, collaboration and industry-leading innovation. We currently operate out of a 90-year-old headquarters building that has served us well but is no longer conducive to meeting our future needs.

"The major planned investment in Cleveland and Northeast Ohio we are announcing reflects our confidence in the continued strength of the region and its people and our public partners’ ability to deliver on their commitments.”

Preliminary plans call for Sherwin-Williams to invest a minimum of $600 million to build both facilities.

The planned new global headquarters would be in downtown Cleveland just west of Public Square between Saint Clair Avenue and Superior Avenue and would be approximately 1,000,000-square-feet in size.

The planned new R&D center would be in Brecksville, located off I-77 at Miller and Brecksville roads.

The R&D center would serve as the corporate anchor for a new mixed-use development project and would be approximately 500,000-square-feet in size.

Combined, the two facilities would house more than 3,500 employees with room to accommodate significant future growth.

Sherwin-Williams estimates it would add a minimum of 400 jobs at these facilities over time, an increase of 11 percent to the company’s current local workforce.

Many of these jobs will include professional staff, engineers and chemists.

Sherwin-Williams is working with several state and local partners on this project, including the State of Ohio, JobsOhio, Cuyahoga County, Cleveland-Cuyahoga County Port Authority, the City of Cleveland and the City of Brecksville. Approvals of the company’s economic development packages and other matters remain pending and are expected over the next several months.

Sherwin-Williams has conducted a national search and explored multiple potential sites in other states as part of this project.

“Sherwin-Williams has been a tremendous asset to our community, and we’re pleased to see their planned commitment for continued growth,” County Executive Armond Budish said. “This project again demonstrates that our region can compete on the national stage, and we intend to use this model as an example for other companies to locate in Northeast Ohio.”

“Sherwin-Williams has been a part of the fabric of our community for 154 years. A new global headquarters in Cleveland lays the foundation for the next chapter for both Sherwin-Williams and our city’s history,” Cleveland Mayor Frank G. Jackson said.

The R&D center and global headquarters project continues to be a multi-year process.

The transition to the new facilities is not expected to occur until 2023 at the earliest.