Corrosion resistant coatings have always been a high priority in the industry. A new and very promising coating has been developed that could have significant impact throughout the industry and has widespread application potential.  For that reason I am including almost the entirety of the press release from SEAS below.  I just think this is a novel and unique approach that certainly looks promising.

Researchers at the Harvard John A. Paulson School of Engineering and Applied Sciences (SEAS) have developed a new surface coating for steel made from rough nanoporous tungsten oxide.  It is the most durable anti-fouling and anti-corrosive material to date, capable of repelling any kind of liquid even after sustaining intense structural abuse.

The new material joins the portfolio of other non-stick, anti-fouling materials developed in the lab of Joanna Aizenberg, the Amy Smith Berylson Professor of Materials Science and core faculty member of the Wyss Institute for Biologically Inspired Engineering at Harvard University. Aizenberg’s team developed Slippery Liquid-Infused Porous Surfaces in 2011 and since then has demonstrated a broad range of applications for the super-slick coating, known as SLIPS.

“Our slippery steel is orders of magnitude more durable than any anti-fouling material that has been developed before,” said Aizenberg.  “So far, these two concepts – mechanical durability and anti-fouling – were at odds with each other. We need surfaces to be textured and porous to impart fouling resistance but rough nanostructured coatings are intrinsically weaker than their bulk analogs. This research shows that careful surface engineering allows the design of a material capable of performing multiple, even conflicting, functions, without performance degradation.”

The material could have far-ranging applications and avenues for commercialization, including non-fouling medical tools and devices, such as implants and scalpels, nozzles for 3D printing and, potentially, larger-scale applications for buildings and marine vessels.
The biggest challenge in the development of this surface was to figure out how to structure steel to ensure its anti-fouling capability without mechanical degradation. The team solved this by using an electrochemical technique to grow an ultrathin film of hundreds of thousands of small and rough tungsten-oxide islands directly onto a steel surface.

“If one part of an island is destroyed, the damage doesn’t propagate to other parts of the surface because of the lack of interconnectivity between neighboring islands,” said Alexander B. Tesler, former postdoctoral fellow at SEAS, current research fellow at Weizmann Institute of Science in Israel and the paper’s first author. “This island-like morphology combined with the inherent durability and roughness of the tungsten oxide allows the surface to keep its repellent properties in highly abrasive applications, which was impossible until now.”
Electrochemical deposition is already a widely used technique in steel manufacturing, said Aizenberg.

“I don’t want to create another line that would cost millions and millions of dollars and that no one would adopt,” Aizenberg said. The goal, she said, is to be scalable, but not disruptive to current industry practices.
The team tested the material by scratching it with stainless steel tweezers, screwdrivers, diamond-tipped scribers, and pummeling it with hundreds of thousands of hard, heavy beads. Then, the team tested its anti-wetting properties with a wide variety of liquids, including water, oil, highly corrosive media, biological fluids containing bacteria and blood. Not only did the material repel all the liquid and show anti-biofouling behavior but the tungsten oxide actually made the steel stronger than steel without the coating.

Medical steel devices are one of the material’s most promising applications, said Philseok Kim, co-author of the paper and co-founder and vice president of technology at SEAS spin-off SLIPS Technologies Inc. “Because we show that this material successfully repels bacteria and blood, small medical implants, tools and surgical instruments like scalpels and needles that require both significant mechanical strength and anti-fouling property are high value-added products we are exploring for application and commercialization,” said Kim.

Another avenue for application is functional 3D printing and microarray devices, especially in printing highly viscous and sticky biological and polymeric materials where friction and contamination are major obstacles.
U.S. Navy spends tens of millions of dollars each year dealing with the ramifications of biofouling on hulls. Organisms such as barnacles and algae create drag and increased energy expenditure, not to mention the costs of cleaning and reapplying current anti-fouling paints, most of which are harmful to the environment. If scaled-up, this material could provide a cleaner, more cost-efficient alternative.

“This research is an example of hard core, classic material science,” said Aizenberg. “We took a material that changed the world and asked, how can we make it better?” 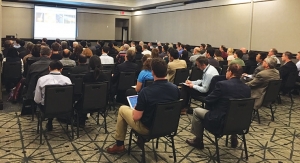