Nissan in Europe has become the first manufacturer to apply glow-in-the-dark car paint to promote its all-electric LEAF, and to encourage more people to convert to solar energy at home. The manufacturer worked with inventor Hamish Scott, creator of STARPATH, which is a spray-applied coating that absorbs UV energy during the day so that it glows for between eight and 10 hours when the sun goes down. 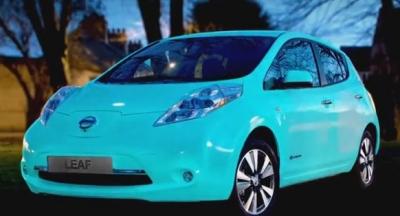 Nissan's glow-in-the-dark LEAF
While glowing car paint is already available, as are glow-in-the-dark car wraps, the bespoke, ultraviolet-energized paint created especially for Nissan is unique thanks to its secret formula made up of entirely organic materials. It contains a very rare natural earth product called Strontium Aluminate, which is solid, odorless and chemically and biologically inert.

Various third-party companies have applied non-organic glow-in-the-dark paint to vehicles before, but Nissan says it is the first carmaker to directly apply such technology. Nissan's unique paint, if made commercially available, would last for 25 years.

According to Kayleigh Edwards, corporate communications manager at Nissan Motor GB, the glow-in-the-dark LEAF idea came about because Nissan wanted to highlight the financial savings that one can make by owning and running an all- electric car like the LEAF.

“In fact,” she said, “the LEAF was the first ever mass-manufactured 100 percent electric vehicle. From Nissan's database of LEAF owners who were surveyed recently, we found that people were indeed making significant savings, thanks to the fact that the LEAF costs just 2 pence per mile to run - much less than traditional petrol or diesel cars.

“One of the things LEAF owners said they were spending the money they saved on was making their homes greener, as well as their motoring. Increasingly, people are using the savings to buy and install solar panels to their homes. Meanwhile, the glow-in-the-dark paint we used to create the car is UV-energized, meaning it takes its power from sunlight, just like the solar panels. This was the creative spark for the idea as a whole,” Edwards said.

The media response to the glow-in-the-dark LEAF has been “huge,” Edwards said. Within 48 hours of the car’s unveiling, there were more than 140 articles across national and technology media, as well as online publications.

“The reaction from drivers and existing LEAF customers has been similarly  good, with many people contacting Nissan to ask whether the glow-in-the-dark paint will be made an option for owners,” she said. “Sadly, this won't be the case  as this was a one-off application of a very bespoke paint that was created especially for Nissan and would not be commercially viable as an option in  the car, whether for Nissan or its customers.”

The formula for the paint and the techniques used to apply it to the Nissan LEAF are proprietary to Hamish Scott, the inventor of STARPATH, who made it specifically for the Nissan LEAF.

"The Nissan LEAF is a shining beacon of sustainability and the future of motoring," said Nissan Motor GB Limited EV Manager Paul O'Neill. "Not only is it saving our customers money in running costs, but it we are now seeing how it is helping people become more environmentally sensitive by reducing their carbon footprint."
Related Searches
Related Knowledge Center