As the three-day European Coatings Show (ECS) and Congress drew to a close in Nürnberg, Germany on March 21, 2013, attendees and exhibitors alike found the show to be a success.

According to NürnbergMesse and Vincentz Network, the organizers of the show, approximately 26,000 attendees and 962 exhibitors visited the show. The congress also drew well, as more than 650 attendees listened in on the 144 presentations.

Exhibitors that Coatings World talked to at the show generally said the show went well. Michael O’Brien, general sales manager, Halox, explained that because of this year’s extended Congress, the show started off slowly, although it progressed by the second day.

“When you have so many formulators that are in the congress during the first day, it takes away the amount of formulators you get to your booth the first day,” O’Brien noted. “They pay a lot of money to go to the congress, so it doesn’t bother me that they spend a lot of time there. I would, too, if I spent $1,000 a day to go, but when you spend a lot of money on your stand, you want the traffic to be all three days. So the second and third days are usually the best for us,” O’Brien said.

Compared to the 2011 show, O’Brien explained that despite the slowing down of the market, this year’s show seemed to be about the same as the last ECS.

“I would say it’s about the same as last time. We were kind of getting numbers on leads and they look similar to what we saw two years ago, which is actually pretty good considering the European market has slowed down a lot in the last two years, so we’re happy with the attendance,” he said.

“We had a lot of distributors from Asia and the Middle East coming to visit the show.  We also wanted to meet all our distributors and follow up on last year and see what they want for this year, and meet new customers who are interested,” Van de Woestijne explained.

Dr. Ulrich Kusthardt, president, Evonik Industries, found that the second day was the busiest for Evonik, and they enjoyed the discussions and talks going on for them at the ECS.

“The show was very busy, especially the second day, but I would say there were less Asian visitors this year. There have been very good talks, very intense discussions, and less people that just ask for catalogs and go. I think maybe there are less visitors than the last show, but that is not surprising because of the slowdown of the economy,” Dr. Kusthardt explained

Dr. Kusthardt also explained that Evonik’s goal for the 2013 ECS was to get into talks with people about interesting new projects and their innovation capabilities.

“We are organized by various business units working for the coatings industry, but we are able to bring them all together,” he said.

Roberto Aroldi, industry manager coatings, Eastman Chemical, said that in addition to being busy as usual, the attendance was very good.

“I attended the first show in 1991, and every year the attendance grows,” he said.

Dirk DiSantis, regional business director, Additives and Functional Products, Eastman Chemical, added that the ECS is a global show for the industry

“This is a great show because it’s really supported globally by the industry and it’s well organized. So as an exhibitor, it’s a great place to be. You get a lot of what you want, your customers are here so you can get a lot done in a short amount of time,” DiSantis said.

Eastman was excited for the show this year, not only to introduce new technologies and products, but also to share that they were named the 2013 Energy Star Partner of the Year by the Environmental Protection Agency in the United States for the second consecutive year. Eastman was given the award based on their strategic managing and improvement of energy efficiency in 2012. Eastman Chemical is the first chemical company to get this recognition more than once.

Zhi Li, president, Trust Chem explained that the number of visitors has seemed to increase for this year’s show. Trust Chem’s goal for the ECS was to advertise new products they’d developed.

“We have some new products on the market, so we want to advertise them so people know we are launching products to the industry to help to reduce costs,” Li explained.

An Asian distributor, Helmut Unkel, director, H.J. Unkel Group, felt that compared to previous shows, the 2013 ECS was the same if not better.

“It’s at least as good, probably even a little bit better in terms of organization, but we found that all the booths were very well constructed and nicely presented,“ Unkel said.

Alan Kalmikoff, president, Keim Additec Surface USA, explained that he had not seen a show as strong since before 2008.

“If we compare the last seven exhibitions, over the period of 14 years, we probably have not seen as strong of a show since before 2008. A typical show in the early 2000s was more like this, a lot of large anchors, a lot of large floor space, and then we went into that period where it was a little less participation, people spent less money and had smaller booth. The participation is always strong at this show, so this becomes the premiere show other than Asia, so there are a lot of new faces and a tremendous entourage of Chinese influence, and that’s the influence of where the chemistry is coming from these days,” Kalmikoff said.

“This is an upbeat show, bright, and our organization has committed more money, resources and space to this show,” Kalmikoff added. “I would say it’s paying off.”

Kalmikoff explained that the 2013 ECS was especially good for business and discussions.

“This show has more serious discussions and business transactions – customers come down with appointments to see technical, sales and marketing people, much more than any other show in the world of coatings,” he said.

Shruti Singhal, director, global marketing and innovation for Ashland, found that this year’s show was exceptional for Ashland.

“For us it’s been terrific. This has truly turned into a global show. I think the name European Coatings Show is a misnomer because while it’s in Europe, everything about this show is international. We have customers here from Asia, Europe and certainly a lot from North America. The attendance has been fantastic so for us it was very successful. We have a much bigger presence, and as a company we have grown, so we wanted to project that at the ECS,” Singhal said.

Singhal said that Ashland’s initiative at the ECS this year was to understand the needs of their customers and truly provide solutions for them. “We’re an additives supplier, and we are truly the solution provider in the industry. Everyone talks about being the innovator and solution provider, but our message is we are really trying to tie in very closely with our customer, understanding their problem and developing solutions to their needs, or their unmet needs,” he said.

Myron Petruch, president, Performance Pigments and Electronic Materials, Sun Chemical, found that this year was especially good for them at the ECS as well.

“This show was great for us, particularly because last year we purchased Benda-Lutz, so it was a new business for us. Just integrating that into our booth has worked out well, and we’re really impressed with how global this show is. It’s not only European, but also people from America, Latin America and Asia,” Petruch said.

“We find that at this particular show, people are really here to do business, so the quality of the meetings is also outstanding. There’s a social component, but in terms of quality leads and conversations, every one is here, so it’s been excellent,” Petruch added.
Petruch also explained that Sun Chemical’s presence, not only global but also local, gives them an advantage.

“For any solution that you would need for coating, whether it be automotive coating, industrial coating, deco coating, we’ve got the global base for pigments and effects,” Petruch said. “We have the global supply chain and the technical wherewithal to meet the needs of the global customers. We also have the presence in Europe, and the innovative products and technology to service the local needs of the individual countries and individual smaller and medium-sized coatings, inks and adhesives manufacturers as well.”

Paul Cordfunke, market manager chemical industry, Purac, said that although 2013 was Purac’s first year as exhibitors, it was a very pleasant and interesting experience.

“What’s interesting for us is you hear the word sustainability everywhere, and we’re a supplier of sustainable raw materials, so that’s important and offers a lot of opportunities for us. It’s an efficient way for us to meet a lot of people and get a lot of new leads,” Cordfunke said.

An attendee, Joachim Lange, head of purchasing, Gleitsmann Security Inks, observed that there was less attendance at this year’s ECS than previous years, but found this to be a positive.

“It was not as crowded as the last one, and it’s better this way, because at every exhibition center there’s always someone there who has time to speak with you. I guess it’s due to the problems in the chemical industry and the printing industry. There are still some things that are under-run, but not yet finished,” Lange said.

Lange said he was able to address complaints and formulate solutions at the ECS this year, as well as meet with current and potential vendors.

“I like to meet my vendors at the shows just to shake hands, and to find out if there’s new things on their side or my side. It’s good because all of my vendors are here in one place so I can meet them all in a very short time,” he said.
Jack Gallagher, vice president sales, Shamrock Technologies, said that he noticed a drop in the number of attendees as well.

“I don’t want to say the show is disappointing, but it seems that the attendance was definitely down, probably due to the present European economy. There are a lot of ink customers and a lot of coatings customers here. All the major companies are well represented, but instead of sending four to six people, we see maybe two people, so they are cutting back on overall show expenses,” he said.

Joon Choo, vice president, Shamrock Technologies, agreed that although attendance was down, it wasn’t necessarily a bad thing.

“The one good thing about that is although the number of people attending has gone down, we are finding that the quality of the attendees is really good for a show of this size,” Choo said.

“We’ve had really good discussions with technical folks here to look at what’s good for the future instead of what costs less. It’s more what is new, and what are you doing for the long term. I think those two types of questions are critical for a show like this, and the ECS has always been known for that. When we decided earlier on about what we were going to showcase here, it really was more about what the market needs not for today but going forward three, five years, 10 years from now,” Choo said.

Gallagher added that Shamrock’s goal for the show was to find new customers and contacts.

“We like to seek out new customers as the bulk of our European customer base is here,” Gallagher said. “Finding new key contacts at the major accounts that we deal with is always very important. There’s been a lot of transition in purchasing and technical in the last two years. New people are now handling new responsibilities, so we’d like to get familiar with them. Both technical and purchasing people, the new ones, have differing philosophy than their predecessors, so it’s key. Shamrock looks to take a business relationship and make it personal. We look at our customers as partners and not just customers.” 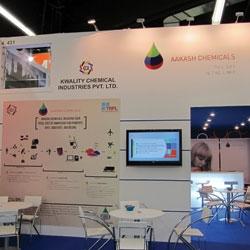 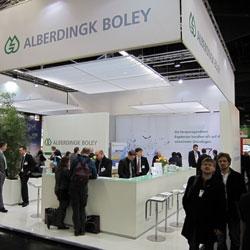 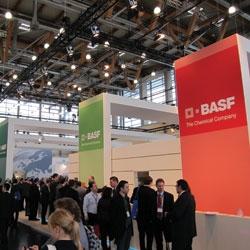 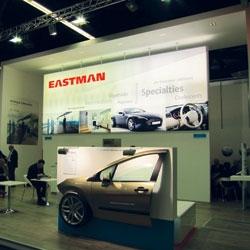 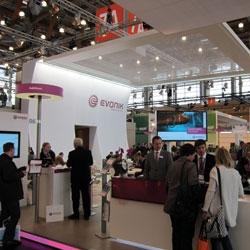 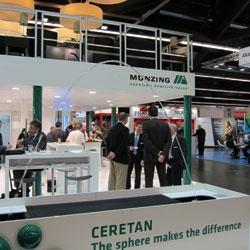 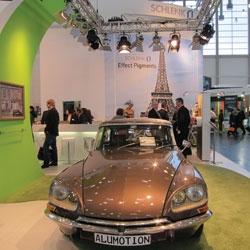 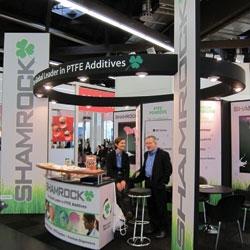 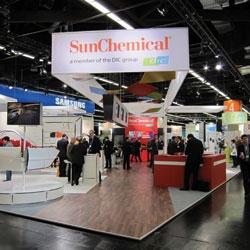