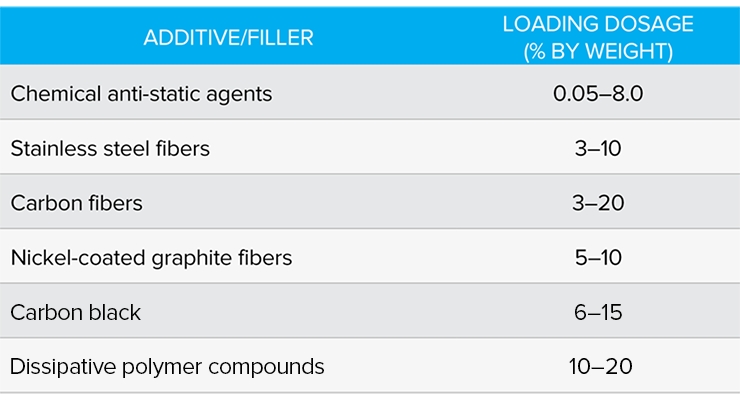 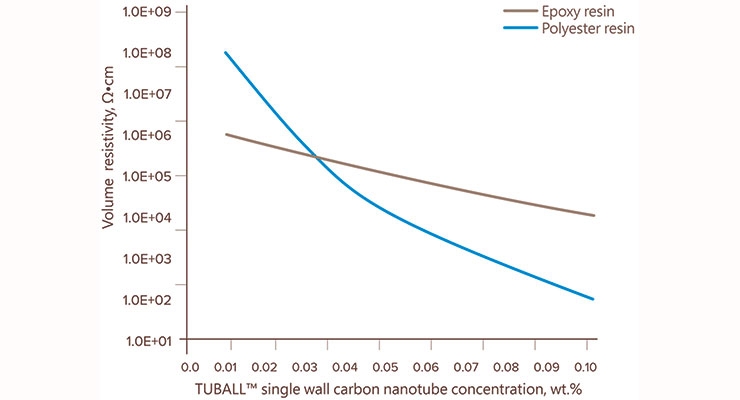 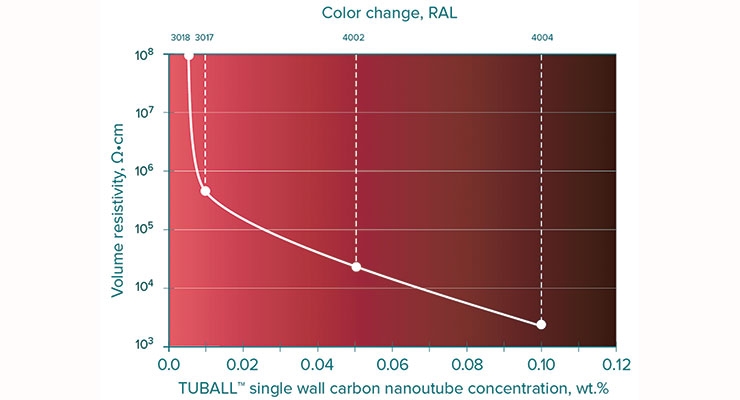 Figure 2. Adjusted resistivity level and color change in epoxy resin depending on the loading of TUBALL™, a single wall carbon nanotube additive.

Electrostatic discharge (ESD) is an ongoing problem for the electronics industry. The cost of static faults to the electronics industry is estimated to be tens of billions of U.S. dollars annually. Furthermore, ESD is not only a significant cause of device failure, it also impacts productivity, product reliability, manufacturing profitability, and personnel safety in a number of fields, including petroleum and chemical processing, munitions plants, textiles, clean rooms, and hospitals.1 One ESD prevention measure that appears to be effective is the installation of static control flooring.

However, the majority of the commonly used conductive additives require a high loading level, starting at 3% and going as high as 20%, which inevitably leads to difficulties in processing and also negatively impacts color (Table 1).

High loadings of the conductive additive can decrease the mechanical strength of floorings and degrade the surface smoothness. Furthermore, many conductive additives have problems with achieving uniform dispersion in the compound matrix, so manufacturers often have to deal with the widespread occurrence of hot spots on the surface.

The additive that is capable of solving the loading level problem and the associated negative effects was discovered 25 years ago – single wall carbon nanotubes. With more than a decade of research and a number of breakthroughs in recent years, viable commercial-scale solutions have now emerged to integrate these nanotubes into industrial products, including batteries, plastics, elastomers, coatings, and resins. ESD flooring has been a notable success story with flooring products containing single wall carbon nanotube additives already in production.

For any conductive additive, a conductive path can be formed in a resin once a particular dosage is reached. This is called the percolation threshold and above it the electrical resistivity drops due to the formation of an interconnecting conductive network. The key advantage of single wall carbon nanotubes compared to other traditional additives lies in the extremely low dosages required to reach the targeted level of conductivity – from as little as 0.01% of total compound weight. Due to their small diameter and high aspect ratio, this minimal dosage of nanotubes is sufficient to create a uniform conductive network in the material matrix2 that provides a compound with a surface-to-surface and surface-to-ground resistance level in the range of 108 – 102 Ω•cm in compliance with the following worldwide standards: ANSI/ESD S 2020, ASTM F 150, IEC 61340-5-1, NFPA 99, and SJ/T 11294-2003.

Figure 1 shows the volume resistivity in two different resin systems at various loadings of the single wall carbon nanotubes. The resin systems were an epoxy (D.E.R. 330) and a polyester resin (AROPOL M 105). Performance in the different systems was validated by Technische Universität Hamburg-Harburg (TUHH). All measurements were conducted according to ASTM D257.

Now that the loading requirement to achieve the targeted conductivity level can be significantly reduced, several other material properties can also be enabled. For example, in contrast to traditional additives that turn materials black, the low loadings of nanotubes enable manufacturers to achieve a variety of colors (Figure 2).

In addition to color enablement, nanotubes can provide an improved surface finish, reduced thickness, and allow new properties through secondary additives. In terms of surface finish, the uniform dispersion of single wall carbon nanotubes provides topcoats with an extremely smooth and glossy surface, which is not possible with most other conductive additives.

The ability to use extremely low additive amounts also allows manufacturers of ESD control flooring to develop products with reduced thickness. By adding single wall carbon nanotubes into conductive coatings, manufacturers can reduce thickness as low as 25 micron DFT, creating possibilities for a variety of vertical and other conductive paint applications. Moreover, the time required to maintain or coat an ultra-thin ESD control epoxy or polyurethane topcoat with nanotubes can be significantly reduced, yielding additional cost savings.

The ability to vary the dosage of single wall carbon nanotubes also leaves room for manufacturers to develop other required characteristics, such as thermal conductivity and mechanical property improvements, through secondary additives that could not be loaded otherwise. For example, improving the abrasion, impact and scratch resistance3 of epoxy compounds could be of great value in facilities where heavy forklift traffic occurs.

In spite of the superiority of single wall carbon nanotubes over other conductive additives, they were not widely available until recently due to a number of reasons that are critically important to manufacturers: high price, the absence of industrial-scale production technology, and issues related to dispersion and preventing agglomeration of nanotubes.

OCSiAl entered the market in 2014 with unparalleled production volumes, measured in tonnes of nanotubes, and an attractive price 75 times lower than that of the nearest analogue. A number of unique technologies are incorporated that not only prevent nanotubes from further agglomeration, but also simplify the addition of the already well-dispersed nanotubes into material systems.

Today there are several single wall carbon nanotube-based concentrates for ESD control floorings available on the market – TUBALL MATRIX for epoxy, polyester and other resins and TUBALL COAT for water-based systems. These concentrates have been developed for easy use and specifically designed for resins and coatings. One example of a commercially successful product based on nanotubes is a line of anti-static epoxy flooring developed by one of the largest Russian flooring companies, TEOHIM. An extremely low dosage of 0.01 wt.% of TUBALL provides their compounds with volume resistivity of 108 Ω•cm without any significant impact on viscosity or color. 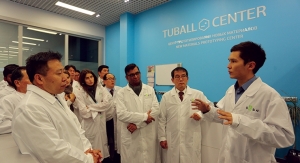