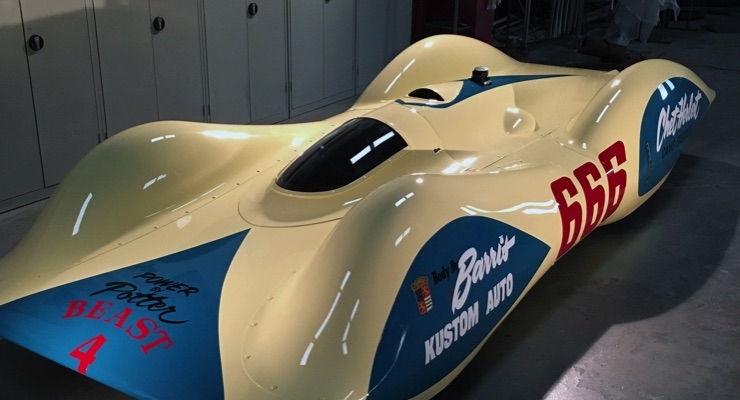 Elite custom car painter Darryl Hollenbeck chose PPG automotive refinish products to give the recently restored iconic 1953 Beast IV Streamliner its sleek blue and yellow finish. Hollenbeck’s artistic contribution was part of a major restoration undertaken by Dan Webb and Ashley and Cory Taulbert at Webb Automotive Art, Grand Blanc, Michigan, to return the low-slung vintage racer to glory. Webb entrusted Hollenbeck and his crew at Vintage Color Studio, Concord, California, to create the radiant period-correct finish. The project was commissioned by, and in collaboration with, the Wally Parks NHRA Motorsports Museum presented by the Automobile Club of Southern California in Pomona. Beast IV was unveiled at the museum in January at the annual Grand National Roadster Show.

According to Larry Fisher, the museum’s executive director, Beast IV was originally built in 1953 by Chet Herbert just in time to compete in that year’s Bonneville Speed Week and International Speed Trials. The aluminum-bodied, Chrysler Hemi-powered racer streaked across the Utah Salt Flats to hit a top speed of 246 mph and break eight long-standing performance records. Beast IV—the successor to Herbert’s original Beast (a motorcycle), Beast II and Beast III racers—ran until 1992 in a number of configurations with a variety of engines and reached speeds up to 289 mph. The racer then rested on its laurels; unused, it fell into disrepair and was acquired by David and Marianne Duthu. The couple donated Beast IV to the museum and agreed to fund the car’s badly needed restoration.

“Color was a challenge,” Hollenbeck said. “There were color photos of the original Beast, and we knew the car was blue and yellow, but the colors looked different in every photograph. So we compared the colors of other cars in photos with the Beast. We figured out the other cars’ colors and were able to come very close to equaling the Beast’s color. Then we generated dozens of blue and yellow samples and tweaked them to match the paint. The museum made the final decision and we gave the Beast its proper design and color scheme.”

Beast IV is now on permanent display with Beast III at the NHRA Motorsports Museum.